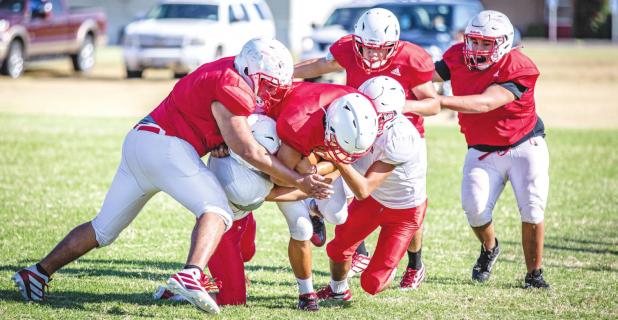 Olney Cubs Score with New Additions to the Coaching Staff

During a recent Olney Cub inner team scrimmage, you could get the sense that there was a new attitude from the players for this upcoming season. The Cubs have an attitude this season of being a winner, both on the field and off.

Olney ISD Athletic Director and Head Coach of the Olney Cubs, Jody Guy, brought the knowledge needed to make the Olney Cub Football Program a success. To further foster turning the Cubs culture into one of success, he brought in two coaches with a winning track record. Offensive Coach, Greg Fortner, who wants to change the culture of not only the football team, but also bringing a winning culture that will translate Olney into being a football town.

In regard to the recent inner team scrimmage, Coach Fortner said, “Practice is going great! We have many young kids who have really pushed and worked their way on to varsity. The kids have really taken the challenge of changing the culture of not only football, but the town! The kids constantly here that we as a program and town have a rich history of winning and succeeding at things and it’s our job to bring it back!! We have had some very surprising players step up and really fly around and show they know the game!”

The second coach brought in is Defensive Coordinator, Jason Powers, who was happy to give a quote on Saturday’s inner team scrimmage. “The defense is beginning to show glimpses of becoming a very good defense. We are still moving some pieces around and trying to get the players in a position for them to have success. We are starting to be in the right spot more often. As we get further into the fall camp we will continue to refine their technique. We have a lot of potential on defense and I look forward to watching this unit grow and mature,” Coach Powers said.

Head Coach of the Cubs, Coach Guy, closed the interviews about the recent inner team scrimmage by saying “It was good to get some full contact with each other. We saw a lot of good things and a lot of stuff to work on. We need to get better each day.”

Potential Senior Quarterback for the Olney Cubs, Carter Hinson, broke his arm during an inner squad scrimmage but after visiting the doctor to have his arm set in a cast, the news looked hopeful. According to Hinson’s Mom, Julie Hinson, the doctor believes that although playing quarterback is not in the cards, he should be able to play on defense in four to five weeks if all goes well. Last year, Carter shined on defense with multiple interceptions and defensive stops through the season.

The Cubs are looking for veterans such as Hector Hernandez and many of the 13 returning players, to step up this year to fulfill the goal of the coaches to turn the Olney Cubs into a winning team.

With “Fear the Veer” still in full effect this season, a big part of the success of the Cubs will be dependent on the offensive line to step up and play aggressively and with a great deal of heart.