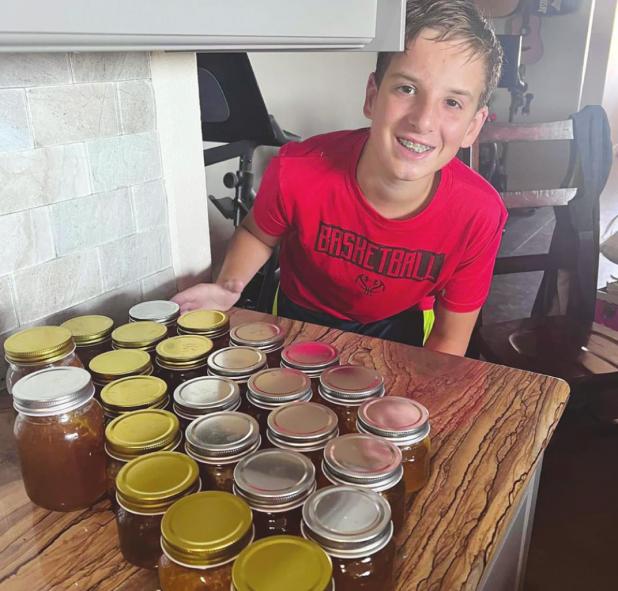 Young beekeeper checks in a year after starting his hive

While home from school in the depths of the COVID pandemic, Colby Johnson started researching beekeeping as something to do when the world returned to normal. A year ago, he and his dad, Dr. Jeremy Johnson, bought his first hive. On July 4, Colby harvested his first honey – 25 pounds of it – and almost immediately sold out. The 13-year-old and his dad, an Olney Hamilton Hospital board member, plan to go big next year by expanding the number of hives and potentially triple their honey output next year to 75 pounds. Colby has a few jars left, and can be reached at jjohnson@grahamhealth.org.

We checked in with Colby, who is about to start eighth grade at Olney Junior High School, to talk about the honey business.

Q: Why did you decide on bees?

A: I wanted to have a small job/hobby that I could focus on and do during the summer to make money and have a small source of income and things to spend on. I looked into it and I saw a bunch of YouTube videos saying it’s not that hard because bees usually do most of their stuff by themselves. They were really good for the environment but the natural ones were declining because of pollution and habitat destruction.

Q: How did you set up your hives?

A: We put shingles under them because of the long grass, and other things like beetles and bugs that want to eat the honey because it’s one of the only sweet things out there. Dr. Johnson: We put a couple of cinder blocks down and put some landscape timbers and that’s the base for our hives.

Q: What did you learn in the first year?

A: That the hives easily get blown over. We found it after a week. It blew over in one of the “northers” in October. We had to stack it back up and put ratchet straps over the top of it and [attach it to] stumps so it would be heavy enough.

Q: When do you see honey that you can harvest?

A: This spring they started filling up the honey super. On July 4 it was ready. First, you make sure the honey is mature by seeing that they’ve already capped it and then you take out the frame and you have a honey extractor that spins the frames … we made 22 jars of it. It doesn’t taste like store-bought honey, it has a flowery taste.

A: Yes, mostly at my parents’ [offices]. I was planning on doing the farmer’s market, but we ran out of honey so fast. We still have eight or seven jars left. They’re $10 each.

Q: What’s your favorite part of beekeeping so far?

A: Probably the making it part because you get to see what your bees have been making their entire lifespan and to see what was in the honeycomb and finally getting what you waited for year round.