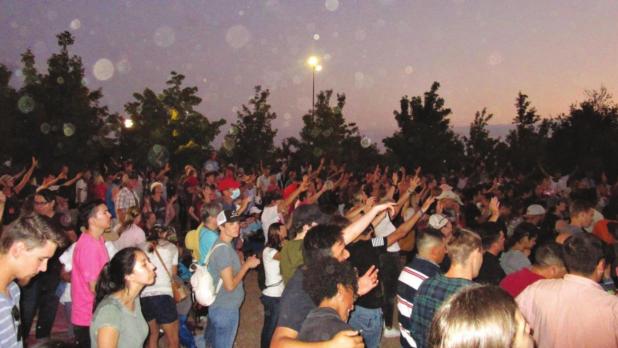 I remain in awe of the Angelic photos that artist Max Greiner shared with me. He captured Angel Orbs in the photographs he shot at the Sean Feucht Worship event at the Coming King Sculpture Prayer Garden Sunday, Oct. 4. He describes the event as a sanctioned event aligned with a vision that he had more than 18 years ago.

“Up until Sunday, our largest one-day attendance was the Garden Dedication on 9/13/15. This event fulfilled exactly my August 2002 vision when God gave me the Garden’s design and cross and then showed me a picture of cars parked along a highway access road trying to get in. People were leaving their parked cars and walking up the hill on foot because there were so many cars,” Max exclaimed.

Greiner recalled that traffic was backed up on the highway with cars waiting to take the Kerrville exit, while the vehicles inside the 24.5-acre Garden filled every open space.

“We watched entire families walk great distances and then climb the 1.930’ hill to reach “’ The Empty Cross on God’s holy mountain,” Greiner said.

Greiner estimates attendance between 4,000 to 6,000 and more than 100 water baptisms that occurred at the Garden’s “Living Water Fountain.”

The Coming King Foundation (TCKF) has been inundated with calls, emails and meetings since the Sean Feucht worship event. Greiner extends his gratitude to prayer intercessors and warriors who continue to intercede on his behalf and to everyone who served at the event.

The Sculpture Prayer Garden is located Professional at 520Benson Drive in Kerrville, Texas, and ctory is open all year from 7 a.m. until midnight. I encourage you to visit the website to learn Pest control more about TCKF—www.TheComingKingFoundation.org. You may send donations to The Coming King Foundation – P.O. Box 290555 – Kerrville, TX 78029-0555. All donations are tax-exempt to the extent allowed by law. Additional questions should be directed to 830.928.7774 or office@thecomingkingfoundation.org.