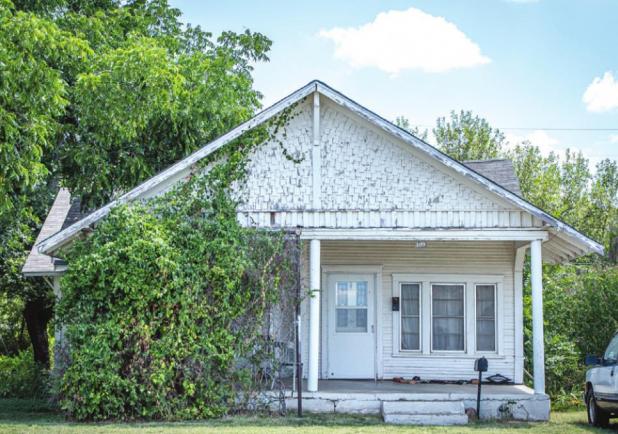 George Hall Roach, Sr. (1869-1954) and his wife, Bettie (Minor) (1872-1952) married in Decatur in 1894 and moved to Olney in 1896 when Bettie became a charter member of First Baptist Church. Mr. Roach entered the mercantile business in old Olney soon after his arrival. When the WF&S arrived in 1907, he and his brother, Cherrie and Mr. Stevens formed a partnership as Stevens Roach with the business located at Avenue C and Main Street. George and Bettie lived at 105 East Oak starting around 1900. They moved to this house built on the southeast corner of S. Avenue D and Hamilton, with Firstt Baptist having moved their wood-frame building from Spring Creek Road just across the street in 1912. In 1916, First Baptist was built at Main and S. Avenue D on this same block. In 1917, W.T. Campbell sold Campbell Banking Company to Stevens-Roach, and George was named president of the bank, located on the north side of Main in the 100th block. The challenge of running the bank and his mercantile interest proved too hard on Mr. George Roach, so they imported Mabry Wolverton from Mart, Texas, to run the bank, which was later named City National Bank and moved to the south end of the Stevens Roach building where they built the white brick building at S Avenue C and Main in the early 1920s. The Roaches had an only child, George Hall, Jr., who married Peggy Bridges, whose parents were Basil Bertram (1892-1975) and Maude (Avery) (1895-1961) Bridges. Following the Roach’s deaths, the Roach Estate sold the property to First Baptist in 1954 and used it for church purposes for several years.

In 1962, the church sold the house to Marvin (1922-1976) and Ellen (Boswell) (1924-2009) Lee for $2,600 and the lot on S. Avenue H. (The signers of the deed for the church were Frank Sprinkle, Ray Davis and Harold Myers.) The Lee clan that Marvin belonged to is quite large, and most would remember his brothers Clarence and Lester. This location proved to be a wonderful place to raise a family with the schools nearby and neighbors such as the Medline, Larsens, Peters, Selfs, Whitakers and others. Marvin served in World War II, ran a Conoco station at Main and Avenue H., and married Ellen in 1947. He sold insurance later in life for American National Insurance.

Howard tells of when the house was moved to Avenue H. He rode on the house’s front porch as it moved along to its new location, and he was 6 years old. Howard has two sisters—Mary and June—and they all graduated from OHS—June in ‘69, Mary in ‘72 and Howard in ‘76. Howard has made his way in life through music. His music education was through the public school with Frances Key and tuba in the OHS Band. Howard has two daughters, but they never lived in this house. Howard plays guitar and piano and plays professionally –at one time, he played at Dallas Cowboy Randy White’s barbecue place in Dallas. He had a piano bar in Austin on Fifth street at one time. He plays at Possum Kingdom at the restaurant at Possum Hollow on weekends regularly for 14 years. He owns the house with his siblings.