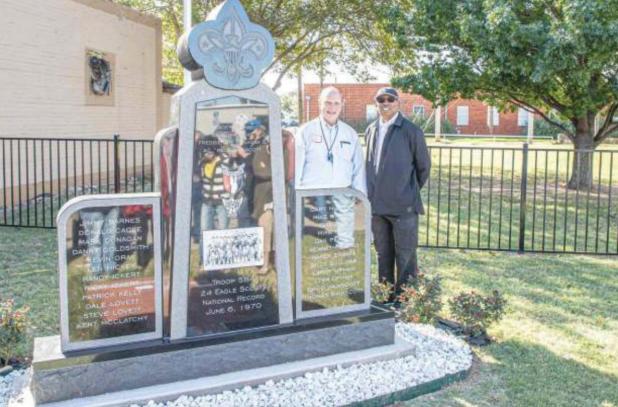 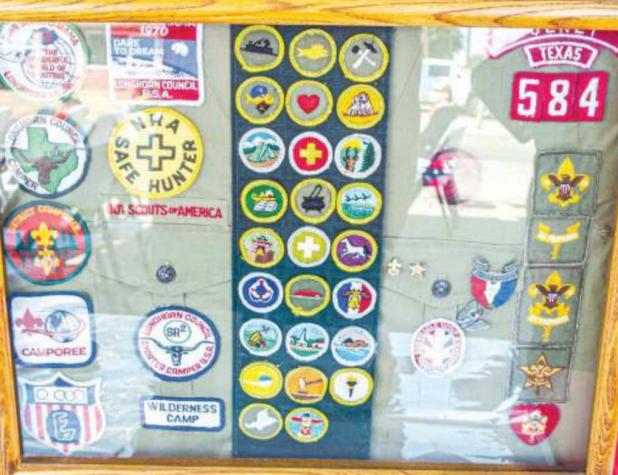 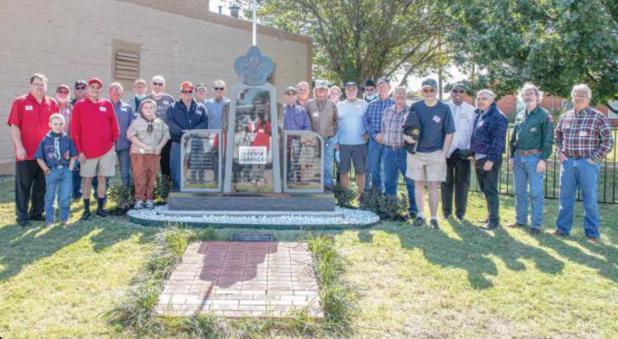 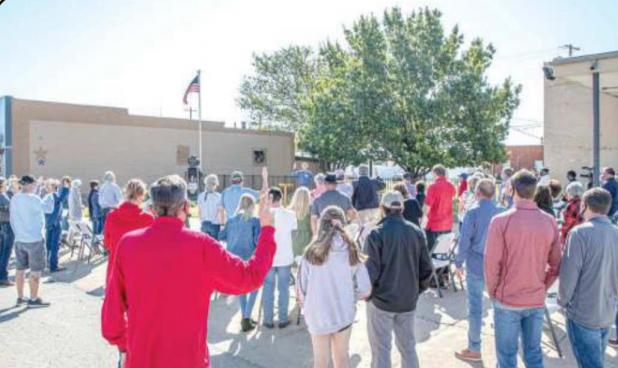 Saturday, Oct. 17, Boy Scouts, Scout Masters, Assistant Scout Masters, friends and family of Olney’s Boy Scout Troop 584 gathered in downtown Olney for the dedication ceremony of the monument dedicated to the remarkable achievement of Troop 584 (having the most Scouts to make the rank of Eagle Scout at one time). That number was 24 and set a national record for the most Eagle Scouts to obtain the rank at one time.

The current president at the time could not attend but did commend the scouts for the accomplishment. Troop 584 was sponsored by First United Methodist Church of Olney. The mayor at the time, Horace Botkin, made an official proclamation that June 6, 1970 be named Eagle Scout day in Olney and that all citizens of Olney be requested to display the American Flag to show their support and appreciation of the Olney Scouting program.

June 6, 1970 a special Eagle Scout Court was held at the Olney Cub football stadium to honor the Eagle Scouts. Some highlights from that evening included keynote speaker Col. Wilson E. Speir, Director of the Department of Public Safety. The main address was given by Congressman Graham B. Purcell. The Master of Ceremony was district commissioner of the Butterfield Trail District - Ellis White. The Scouts received numerous telegrams from local, state and national dignitaries as well.

The Eagle Scouts being honored have a total of 573 merit badges. According to Scouting.org, merit badges are awards earned by members of the Boy Scouts of America, based on activities within the area of study by completing a list of periodically updated requirements. Some badges can be earned within hours and some take months to earn. Four are members of the Order of the Arrow; scouting. org states that: The Order of the Arrow is the National Honor Society of the Boy Scouts of America, composed of Scouts and Scouters who best exemplify the Scout Oath and Law in their daily lives as elected by their peers.

Dale Lovett, one of the named 24 Eagle Scouts from troop 584 and a respected member of the Olney Community, was Master of Ceremony for the dedication. When asked what the ceremony was being held for he stated, “the monument is to honor the leaders we had through scouting. We had two leaders that were particularly influential, Freddie Joe Dunagan and Red Wainscott. From 1939 to 2006, we had 77 Eagle Scouts from Olney. Of those 77 Eagle Scouts, Freddie was responsible or influential for 67 of those.”

The monument has a serious legacy to it. The other reason for the dedication ceremony was to give the family and friends a chance to say thanks. Over the years they have lost some of the 24 Eagles and they did not want to let time go on for the opportunity to lose more Eagles without having the opportunity to recognize and honor those that paved the path for them.

“Really it isn’t about what the Eagles did, it’s about honoring the people that carved us into those Eagles,” Lovett said. The monument is here to honor all the Eagle Scouts from 1939 to present. This whole concept, passion and inspiration came about because of Mike Pace’s desire to say, “Thank You.”

In Pace’s speech he stated, “1965 was the first time I attended school in Olney and the first time I could be a part of something. Scouting gave me a place where I could fit in. When I was recognized at OU for my place in the baseball program, I realized how much Freddie Dunagan and Red Wainscott helped make me who I am.”

Lovett says donations were taken up prior to the commissioning of the monument by Eagle Scouts and family’s so that all of the Eagles would have bricks that lay at the foot of the monument. Mike Pace was instrumental in getting the idea of the monument off the ground. Pace said “this is a longer story then I have time to tell here but I just thought this was something that should have been done, and I saw that it wasn’t going to be done and I just wanted to do it.”