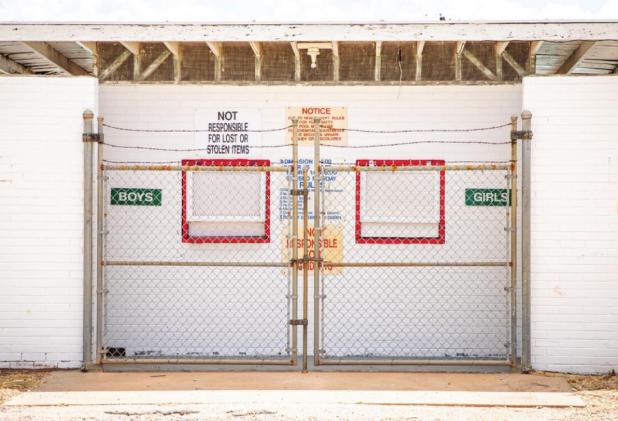 The 70-year-old city pool complex will remain closed all summer and beyond as the City Council, administrators and boosters try to come up with a plan – and about $1 million – to replace it.

“I think we all wanted the pool open,” Mayor Rue Rogers said at the Council’s June 13 meeting. “I think closing it for the summer is our better, only option.”

Public Works Director KC Blassingame noticed that the pool was cracked and leaking when he filled it with water over Memorial Day weekend in preparation for its June 3 opening.

“I agree, it’s not safe,” Blassingame said. “There was one big leak on the slope from the shallow end to the deep end and now there’s probably 10 in different spots.”

Mayor Pro Tem Tom Parker floated the idea of a sinkhole beneath the pool after Pagsuberon said it is not clear where water from the pool is going.

Rogers said Keep Olney Beautiful had planned to renovate the pool as part of its update of Griffin Park. KOB meets June 20 and “will start exploring and looking at grants,” he said.

“We have a short window this summer and the reality is, probably we are not going to be able to do anything but I think our effort needs to be what can we do before next summer?” Rogers said. “Let’s do our part as a city but the city itself can’t do it … it’s going to have to be a community effort. We are going to need everyone’s buy-in and help.”

The pool, restrooms and concession stand do not comply with the Americans With Disabilities Act and will have to be torn down - leading to an eye-popping sum of as much as $1 million for a new complex, Pagsuberon told the Enterprise.