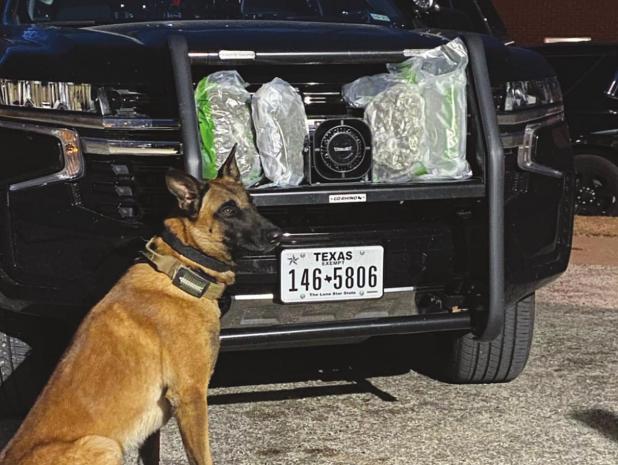 Bond on the Beat: Big Bust

On Dec. 19 at approximately 3:41 am, while working narcotics interdiction, Olney Police Officer Miranda Wright stopped a white Dodge Charger for speeding in the 500 block of West Main Street.

The driver, 20-year-old Miranda Charon of Lubbock, did not have a valid driver’s license. The passenger, 30-year-old Twylo Ards of Lubbock, also had a suspended license.

During Officer Wright’s interview, she observed signs of deception that Charon and Ards may be attempting to conceal a crime. As a result, Officer Wright asked for consent to search the vehicle, and Charon denied consent.

Officer Wright deployed her K-9 partner Bond to conduct an open-air sniff of the car. K-9 Bond alerted, giving Officer Wright probable cause to search for narcotics. Officer Wright questioned Charon and Ards after the K-9 alert, and both denied any knowledge of anything illegal in the car.

During the vehicle search, a red and black bag was located in the trunk and subsequently searched. The bag contained four large vacuum-sealed bags of marijuana. The total weight of the marijuana was approximately 4.65 pounds.

Both Charon and Ards were arrested and charged for Possession of Marijuana >4oz<=5lbs, a State Jail Felony, and transported to the Young County Jail without incident.