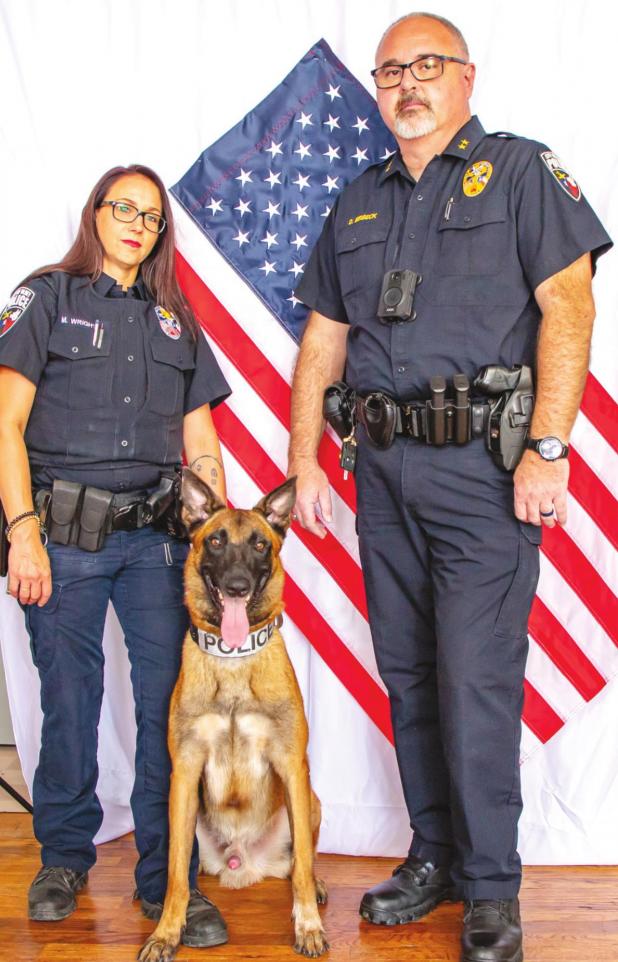 Recently the Olney Police Department [OPD] added an officer to the force to help combat the drug problems that have plagued Olney in the past.

That officer’s name is Bond, with badge No. 007. You might think the new officer is a super spy, but you would be wrong. OPD’s latest officer is a K9, a Belgian Malinois. According to belgian-malinois-dog-breed-store.com, “Belgian Malinois is often used by police officers, who work in airports, train and subway stations because he has the perfect scent. His keen nose can find drugs and bombs when trained to do so. In addition, he can easily smell and identify scents because of a high level of “sniffling” drive,” which will make a great fit for the OPD to sniff out drugs during stops and other searches.

Chief Dan Birbeck spoke on the new K9 being implemented by the OPD.

“It’s going to be our new canine program were looking to target things like narcotics. The dog will also assist us in search and rescue. Bond will be our new weapon in the war on drugs in our town. We’ve done a lot to try to combat this, but the dog will take us to the next level. We need to start shutting this stuff down,” Chief Birbeck said on funding to secure the K9. “In the beginning, I looked to try to secure funds from outside groups, and so we got two generous grants. We secured one grant for half of the dog’s cost from Tower Extrusions, and then we secured a grant from the Perry Foundation. The [grants] made all this possible. When we decided to start the K9 program, we wanted to do it right. It was not something that we wanted to cut corners on, so we use a nationally recognized Dog Training Center in Mississippi, Southern State K9. Officer Wright was selected to be our K9 handler due to previous K9 experience. We sent her down to get completely refreshed and retrained on canine handling, and we also went down, and we’re very selective on the dog that we chose for the program to make sure that we have the right fit for what we want to do here.”

Chief Birbeck explained when Bond would be used.

“If the officer feels that there’s a reason to search a vehicle, and there’s not verbal consent given, the officer can have the occupants of the vehicle removed lawfully out of the vehicle and then she’ll deploy the dog, and if the dog alerts on the vehicle that’s what the United States Supreme Court has ruled that that is enough for probable cause for an officer to do a nonconsensual search in the vehicle. The dog and the handler are both trained in the queue that the dog is trained to do whenever it alerts on any of the substances he’s trained to detect. Once that dog alerts, then the probable cause is granted to the officers by law, and they can search a vehicle.”

Chief Birbeck closed the interview by saying, “We’re looking forward to continuing to better the services that the only Police Department provides to our community. I think the citizens here want a nice safe community, and we’re just trying to do our best to stop crime and drugs that had taken over Olney for a while. And this is just the next level in the fight to honestly turn Olney back into Mayberry.”