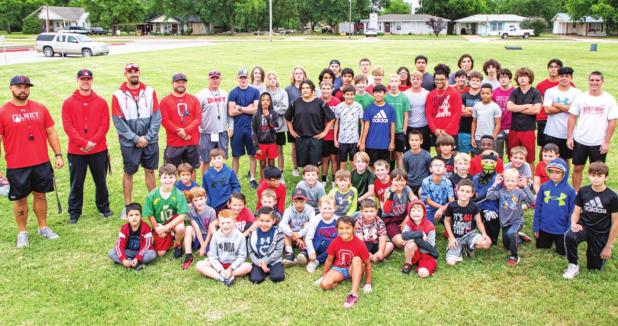 Olney Independent School District’s [OISD] athletic director and head coach of the Olney High School [OHS] Cubs Varsity Football Team, Coach Jody Guy, organized the annual Little Cubs Football Camp. Many OHS coaches were on hand to help organize and run the threeday camp, and they had plenty of help from OHS and OJHS student-athletes, who volunteered their time to help make the camp a complete success.

The camp ran for three days during the week of May 23. During the camp for children in first through sixth grade, the Little Cubs learned the fundamentals of football. The coaches also wanted to instill in the young beginners that playing football is also about having fun and camaraderie.

Coach Guy gave insight into the camp this year, stating. “We’re excited about the number of children who signed up. We’re excited about getting out here and teaching the children a little bit of the fundamentals and having a good time. We enjoy being around one another, and the weather is great weather for the camp. We’ve got a bunch of high school children and junior high school children that are going to come help us out, which will help the camp run smoothly.”

The participants run several drills throughout the three-day camp. Also, there is a photo opportunity where the children get to see what it is like to pose as a football star. At the end of the camp, the attendees will receive a football, a photo of themselves running through the blow-up Cub Helmut and awards for various achievements earned while attending the camp.