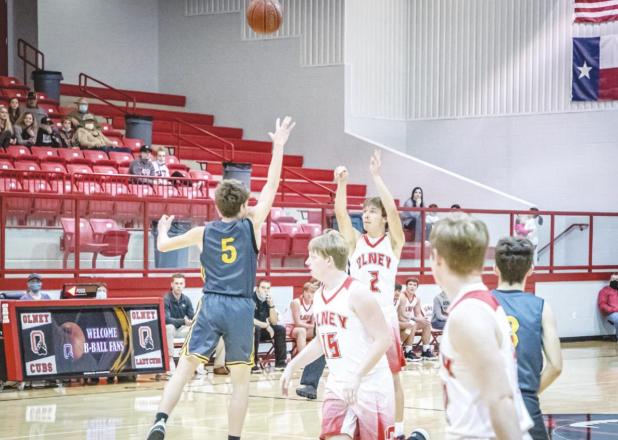 This was #2 Carter Hinson’s first game back after being quarantined for possible exposure to Covid-19. The rest seemed to do him some good as he led the Cubs in scoring for the night and sinking two 3 pointers.

The first period the Cubs kept it within a 2-point spread. #2 Carter Hinson made one from the outside and one jump shot. #13 Gatlin Guy was good for 2, #12 Cole Turner was fouled and put in both free-throws and #24 Dillon Sandlin drove through defenders for 2. Ending first period play with the Cubs 11 - Dragons 13.

The second period #15 Cooper Lane was giving defenders heck under the basket and came away with 2. #12 Cole Turner, one of the Cubs more aggressive players who always causes problems for defenders, crashed through the defenders to land 2. #2 Carter Hinson who has laser focus when shooting outside the line came through with another 3 from outside and #13 Gatlin Guy who plays with an intense focus on both sides of the ball was good for 4. The period ended with the Cubs at 23 and the Dragons at 25.

The third period began with a defensive battle from both teams. Cubs scored 6 and the Dragons 9. #11 Oscar Flores, known for his aggressive style driving to the basket and shooting from the outside, was fouled and came away with one bucket. #10 Braulio Flores another outside shooter came through with 3 and #2 Carter Hinson hit for 2. The fourth period the game seemed to get away from the

The fourth period the game seemed to get away from the Cubs as the Dragons pulled ahead to win the game. Final score had the Cubs at 39 and the Dragons 45. #23 Carter Turner put up 2 points, #24 Dillon Sandlin came through for 2, as did #12 Cole Turner. #11 Oscar Flores came away with two successful free-throws and a 2-point jump shot.

Head Cub Basketball Coach, Coach Dylan Ballard said, “The season isn’t quite going as I thought it would. I am keeping in mind I am replacing a coach who has been here eight years that the kids have had since elementary. So, I know it’s a process. I believe the kids have bought in and are getting better at what I do and the philosophy of the system that we run. I am seeing improvements every single game.”

Coach Ballard ended the interview stating, “Going into district there will be a lot of tough teams, but come district when the games become more meaningful, I think we will be ready, some teams are writing us off, but I think we will come out and surprise some teams.” Fight on Cubs!!!