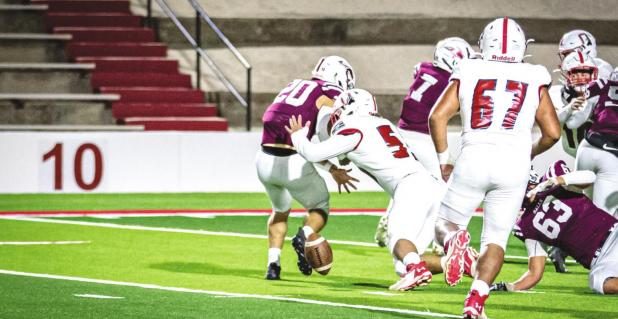 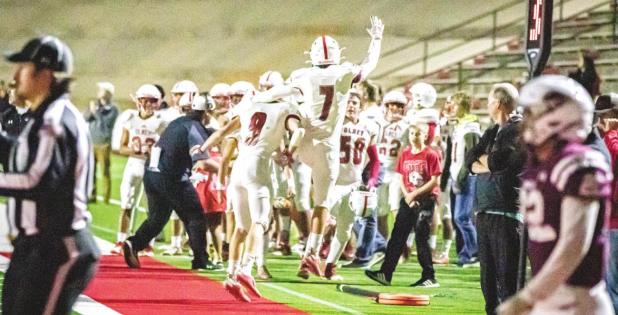 Nov. 11, the Mighty Cubs traveled to Sweetwater, to face off against the Ralls Jackrabbits for the Bi-District Championship. The Cubs did not face the Jackrabbits alone as a great many from the community of Olney made the two and half-hour drive to Sweetwater. The POOHS and rowdy students Olney ISD also made the trip and would be considered the 12th player on the field.

The Cubs fought hard against the Jackrabbits, with the offense making almost no mistakes, plowing headlong down the field against an overmatched Jackrabbit defense. The game gradually began to go lopsided in the Cubs’ favor. The Cub defense was back to their usual swarm mentality and kept the Jackrabbit offense scoring to a bare minimum. The Cubs won the Bi-District Championship in dominant form by a score of 49-14.

After the game, Olney ISD athletic director and Head Coach for the Olney Cub Football Team said, “We were able to come out and execute our game plan. Our coaches did a fantastic job getting our children prepared in a short week, and our children did their jobs. I couldn’t be prouder of our children and coaching staff.”

The following are some highlights from the game; the Cubs’ defense smothered the Jackrabbit offense PAT by Turner, #22 Jovani Rockmore had an 11-Yard Run with a successful PAT by #21 Turner, the defense kept the Jackrabbits offense at bay for the entire quarter except for a 3-yard run for 6-points and a failed 2-point conversion. The Cubs’ offense continued grinding down the field, eating away at the play clock, and having two successful punch-ins by #5 Gatlin Guy scoring twice on two separate drives with 2-yard run-ins; both rushing touchdowns had successful during the first quarter, stopping them on their first drive. After that, the Cub offense took over and pushed downfield, ending the drive with #7 Colin Mason scoring on an 8-yard run; #21 Cole Turner’s PAT was good to bring the Cubs to 7 points in the first quarter. Both the Cub and Jackrabbit defense kept both offenses from scoring throughout the rest of the first quarter.

Second-quarter the Cubs offense unleashed the beast scoring 28 points in a single quarter. #21 Cole Turner had a 12-Yard Run and a good PATs by #21 Turner.

The teams came out of the locker room to begin the third quarter. The OHS Cheerleaders, students, and POOHS were on hand to get the Cubs fired up coming out of the helmet. The cubs had a running escort of Cub Flag waving student fans that cheered on the Cubs as the team made for the sidelines.

The Jackrabbits must have got an ear full in the locker room because they came out of the gate fired up both on offense and defense. The Jackrabbit defense stopped the Cubs’ opening drive, and the Jackrabbit’s offense exploded with a 72- yard rushing touchdown and a successful 2-point conversion. However, the Cubs woke up and returned the energy with a 39-yard rushing touchdown by #5 Guy and a successful PAT by #21 Turner to end the third quarter.

The Fourth-quarter was all about the defense shutting down the Jackrabbit offense, keeping them from putting points on the board. The Cubs’ offense ground out the clock with a pounding ground game and ended the fourth quarter with #22 Geo Rockmore rushing 27-Yards for six and a successful PAT from #21 Turner.

The Cubs claimed victory over the Ralls Jackrabbits with a score of 49- 14. The Championship could not have been won without the hard work of the offense and defensive line, which gets overlooked in the spotlight most of the time. The Coaches dedication to the team they coach and the families of coaches and players who sacrifice time and many events to help support the players and the OHS Cheerleaders, POOHS, and students who cheer on the Mighty Cubs. Congratulations to the Cubs, well earned. The Cubs would love your support at 7 p.m. Nov. 18, at Newton Field in Graham as they take on Albany in the next round of the playoffs. Fight on, Cubs!!!