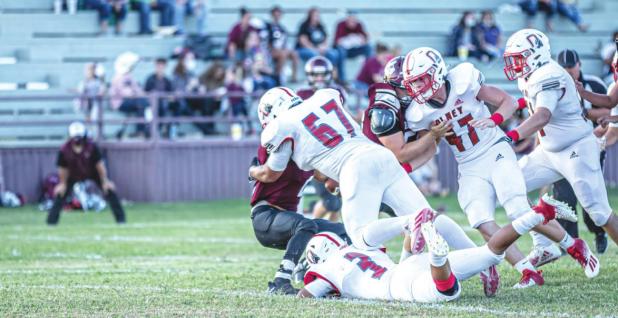 On Sept. 25, the Olney Cubs travelled to Ranger, Texas to battle with the Bulldogs. The Cubs unleashed on both offense and defense to claim victory over the Bulldogs with a winning score of 57 to 6.

On the Defensive side of the ball some highlights include the entire Cub defense who, across the board, controlled the Bulldog offense completely with 2 interceptions and play after play hitting a brick wall with the defense or being broken up by the Cub secondary. Defensive player of the game goes to #3 AB Marquez, with 5 tackles and 9 assists, followed closely by #67 Luis Marquez, who pressed his will against the offensive line, which could not contain Marquez all night.

Defensive Coordinator of the Cubs, Jason Powers, had this to say, “I feel like our defense is doing a better job of playing the next play and not focusing on the good or bad play that just occurred. We gave up a long touchdown early against Ranger, but we didn’t let that get us down. We were able to regain focus and continue to play good defense. We are covering better as a team. Ranger was 3-21 throwing the ball. Two of the passes they completed were thrown into double coverage with very tight windows. The third pass was only a gain of one on a screen. Our defensive line and linebackers are doing a good job against the run and controlling the line of scrimmage. We have to continue to get better every day. We are in the right spot more and more but have to learn to make plays once we are in the right spot.” Fight on Cubs!!!