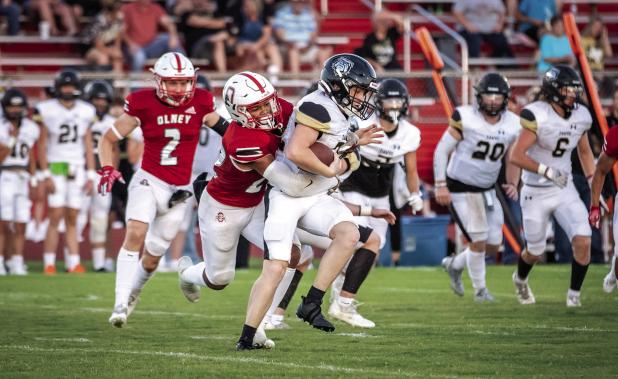 The Cubs traveled to Petrolia September 2, to match grit and heart against the Pirates. The Pirates have for years given a true test of where the Cubs are at in terms of readiness for the season. The Pirates always seem to have some of the biggest players in the district and the prowess on the field usually matches the size of their players.

As the Cubs took the field in Petrolia you could feel the tension in the air. It was quickly replaced with confidence as the Cubs went to work on the Pirates. The Cubs played superior on both sides of the ball, and it would be a long night for the Pirates as the Cubs sank the Pirates by a score of 43-6.

Highlights from the evening include a first-quarter 4-yard run by Gatlin Guy, in which Guy successfully converted for 2 points, bringing an end to a Cubs-dominating Veer offensive drive that ground the Pirates’ defense down the field, ending in the score. The Pirates shot back with a 15-yard run and a failed extra point attempt.

Second-quarter highlights included more of the same: a smothering Cubs defense suppressing the Pirates into submission and 22 more points on the board by the Cub offense. Jovani Rockmore pushed through for a 6-yard run, scoring 6 and Jacob Hernandez was successful on the extra point. Cye Dixon crashed into the end zone for a 5-yard run for 6, and Jacob Hernandez was on point with another extra point. Gatlin Guy pressed the defense and was successful with a 3-yard Run for 6. Guy took the ball through defenders for a conversion worth 2 more on the board. The Cub Swarm defense kept the Pirates quiet for the quarter, not allowing any points on the board for the opponents.

The third quarter was very quiet in terms of scoring, both defenses went to war holding the offenses at bay with no scores allowed for either team.

The fourth quarter had the Cubs offense on the march down the field, the Pirates seemed finished with the aggressive play style of the gritty Cubs offense. Gatlin Guy displayed his running prowess and left defenders’ eyes wide with a 25-yard run for 6 and a failed two-point conversion. Geo Rockmore left defenders scratching their heads with runs reminiscent of Detroit Lions’ great running back, Barry Sanders. Geo ran for a 14-yard touchdown and Jacob Hernandez sealed the extra point with the kick.

It takes a team to win a game, which includes offense and defensive lineman, linebackers, blockers, snappers, coaches and even water boys and girls to name just a few and these are some highlights from the complete domination of the Cubs offense over the Petrolia Pirates: Geo Rockmore rushed for 163 yards and two touchdowns, quarterback Gatlin Guy rushed for 130 yards, scored three touchdowns and led the offense to a win. Cye Dixon rushed for 72 yards and one touchdown. Luis Castillo had a 67-yard reception. The Cub offense rushed for 469 yards, had 67 passing yards, 83 percent efficiency in thirddown conversions, with only 35 yards in penalties and two fumbles.

#22 Geo Rockmore would not be contained against the Petrolia Pirates, scoring twice, rushing for 163 yards on offense and three tackles and one assist on defense. Photo of Rockmore from a previously game. Photo by Will Sadler