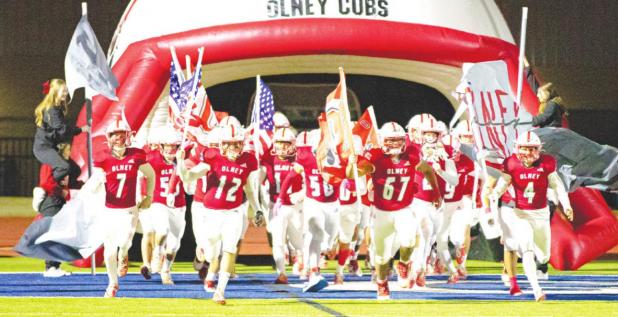 On November 18, the Mighty Olney Cubs met up with the Albany Lions to decide which team would be Area Champions. The game was played out at Newton Field in Graham.

The Cubs were looking like a completely different team than the one that played the Lions in the beginning of regular season. The Cubs fell to Albany at the start of regular season, partly due to big mistakes made and partly because of key players missing.

The Cubs came out strong against the Lions and kept the game close during first half play. The Lions came out after halftime and shut out the Cubs with a strong showing from the Lions defense. The Lions defense continued to have success and pulled the win out, clenching the Area Championship by a score of 10-32.

Some highlights of regular season play supplied by Olney ISD and Head Cub Football Coach Jody Guy include: (Highlights were compiled from 9 of 10 games and do not represent the complete stats for the season, but stats available at the time of print), 3,278 Total Yards, 2,895 Rushing, 321 Average Yards Rushing per game, 59% success rate on 3rd down conversions, 43% completion rating converting 4th downs. #5 Gatlin Guy rushed for well over 1000 yards, #22 Gio Rockmore rushed for over 800 yards and #12 Jonathon Melchor rushed for over 500 yards. Defensively #21 Cole Turner had 47 tackles, 24 assists, 1 interception, #56 Noah Enriquez had 44 tackles, 28 assists and 1 interception and #10 Cyler Sosa had 43 tackles, 21 assists, 1 interception and 1 fumble recovery.

There are too many stand-out players this season and football like most other sports, being successful takes a team effort. The 2021 Olney Cubs played cohesively as a team forming one united unit, which lead to their great success during the 2021 season. The Cubs will be back stronger than ever next season.