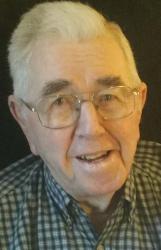 Kenneth Bishop, age 91, of Lubbock, Texas formerly of Olney, Texas, died Monday, January 7, 2019, at Brookdale Grand Court in Lubbock. Funeral services will be at 2:00 p.m. on Thursday, January 10, 2019 in the Chapel of Lunn Funeral Home in Olney, with his nephews, Leo Short and Mike Parker, officiating. Interment will follow at Restland Cemetery in Olney with his grandson-in-law, Earl Haralson, officiating. Arrangements are under the direction of Lunn Funeral Home of Olney. Kenneth was born on July 12, 1927 in Young County, Texas on the family farm near Padgett to the late Ray Bishop and Lee (Morgan) Bishop. He served his country proudly in the Army Air Force during World War II. He owned and operated Bishop Gulf for approximately 40 years and was later the maintenance contractor for the Olney Cemetery Association for 10 years. He was a lifetime resident of Young County until he moved to Lubbock to be near his daughters. Kenneth was a long time and faithful member of the Church of Christ. He married Dorothy Musgrave on February 3, 1945 in Newcastle, Texas. She preceded him in death on October 12, 2006. He was also preceded in death by a daughter, Carolyn Bishop Spradley; a son-in-law, Jim Hyman, four sisters: Faye Wages, Jane Tate, Frances Tate, Dorothy Short; and two brothers: Harvey Bishop and Jack Bishop. Kenneth is survived by his two daughters and sonsin- law: Dodie and Mike Grinnell of Lubbock and Lynne and David Mizer of Lubbock; seven grandchildren: Missy Olive and husband Jon, Crissy Haralson and husband Earl, Niki Hall and husband Chuck, Morgan Hyman and wife Nora, Marshall Hyman and wife Rebecca, Nicole Grinnell and husband Jason, Andrea Grinnell and husband Tim; nineteen great-grandchildren, nine great-great-grandchildren; and one sister, Jean Parker of Graham. Memorials may be made to: Olney Senior Cub Center, P.O. Box 216, Olney, Texas 76374 or to Hospice of Lubbock, 3702 21st Street, Lubbock, Texas 79410. Family visitation will be on Wednesday, January 9, 2019, from 6:00 p.m. to 8:00 p.m. at Lunn Funeral Home. Condolences to the family may be made at www.lunnfuneralhome.com.