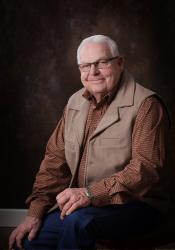 Homer Jean Weatherbee was born on February 10, 1944 in Clarendon, Texas to parents Marvin Jean Weatherbee and Ovella Hill Weatherbee. He grew up in Young County, attending schools in Olney and later Graham where he graduated from Graham High School in 1962.

Homer went on to attend Texas Tech University where he fell in love and married, Johnna Sue Davis. They were married on November 28, 1970, at the First Baptist Church in Throckmorton. Homer and Johnna built their life together in Lubbock where Homer became a successful businessman. He owned Sudsy Springs Car Wash along with being a successful independent oil producer, and rancher in Throckmorton County. He was previously employed by Amoco Production Company, Dover Corporation, and Potato Specialty Company.

Homer’s reputation was one of being a hard worker as well as living life to the fullest. He maintained a positive outlook on life and was always looking for ways to help his fellow man. He was a man of honor, integrity and was good for his word. One of Homer’s favorite past times was celebrating holidays with his family and extended family at Possum Kingdom Lake. Homer also enjoyed the annual Hill Reunion, which celebrated its 65th annual gathering in August of 2015. One of the highlights of Homer’s life was traveling abroad, where his infectious personality enabled him to make lifelong friends with fellow travelers from Italy, the Philippines, and Singapore.

He was a member of Highland Baptist Church where he formerly served as a Sunday School Director and Deacon. He was also a member of the Southwest Carwash Association where Sudsy Springs Carwash was featured in Southwest Carwash Magazine as a flagship carwash model. In 2015 Sudsy Springs Carwash received the City-Wide Pride Award from the Lubbock Chamber of Commerce. Homer also enjoyed his Red Raider Club membership as an annual all-event ticket holder.

Homer was preceded in death by his father, Marvin Jean Weatherbee and a sister-in-law, Betty Davis Corley.

A celebration of his life will be held at 10:30 am, January 4th, at Highland Baptist Church in Lubbock with Rev. Lynn Eckeberger and Rev. Bruce Hammonds officiating. Visitation will be held Sunday evening, January 3rd, from 4:30 pm to 6pm at Venue on Broadway, 2202 Broadway. In true Red Raider fashion, Homer desired for his body to be donated to the Texas Tech University Medical School.

Memorial contributions may be made towards cancer research through the Baylor Health Care System Foundation, https://give.baylorhealth.com.

Please celebrate the life of Homer by visiting www.combestfamilyfuneralhomes.com