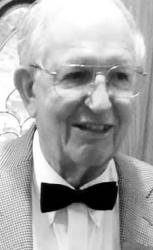 Dwayne D. Simon, 86, of Azle Texas, passed away Thursday, January 10, 2019. Services were held Monday, January 14, 2019 at Azle Church of Christ in Azle. Interment was in Ash Creek Cemetery. Visitation was held Sunday, January 13, 2019 at White’s Funeral Home, Azle, TX Dwayne was born on October 20, 1932 in Rose Hill, Kansas to Luther and Ruby Simon. He met and married his high-school sweetheart, Evelyn in 1950. Dwayne served in the Army Band for 2 years. While living in Kansas he worked at several automotive dealerships. He received a calling to preach, and served as minister in Penalosa and Eureka, Kansas, and in Texas: Olney, Lampasas, Graham and Azle. After 25 years of preaching, Dwayne worked for the U.S. Postal Service for 15 years. He then worked at White’s Funeral Home during his retirement. Dwayne was an elder for the Azle Church of Christ for 19 years. He was preceded in death; by his parents; and sister, Ann Young. Survivors: Wife of 68 years, Evelyn Simon; daughters Patty (Sal) Hermosillo of El Paso, daughter, Kathy (Phil) Jackson of Dallas; grand-daughters, Megan, Shelby, Larae; and great-grandsons, Henry and Owen. He loved his Lord, his family, had many friends and was a great influence on so many more.