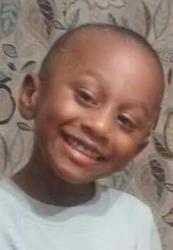 Dominic Tra’Juan Castro, age 3, died Wednesday, May 18, 2016 in Wichita Falls, Texas. Funeral services will be held at 2:00 p.m. Tuesday, May 24, 2016, in the Chapel of Lunn Funeral Home in Olney, with Rev. Jacob Gallardo, officiating. Interment will follow in Restland Cemetery in Olney, Texas. Arrangements are under the direction of Lunn Funeral Home of Olney.