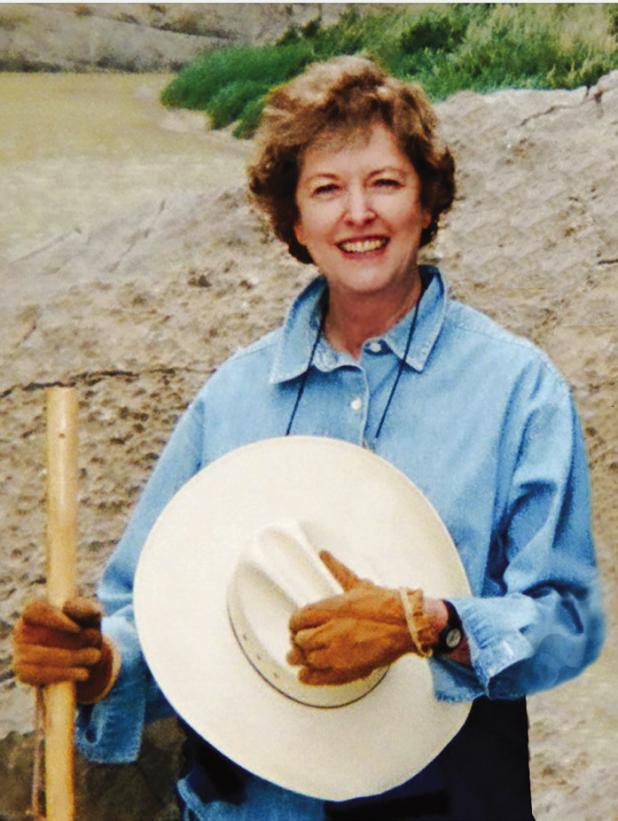 Colleen McClatchy Reeves, 87, passed away peacefully on September 4, 2022, at Seton Hospital in Kyle, Texas, surrounded by her family. Born in Olney, Texas September 24, 1934 to Wright Albert and Adele Jeffery Mc-Clatchy, Colleen was the granddaughter of lifelong Young County ranchers Virginia Kirk Stribling and Sidney R. Jeffery as well as Irene Elizabeth Wright and Nathaniel DeWitt McClatchy, also of Young County. She was raised in Olney, graduated from Olney High School in 1952 and went on to attend Baylor University in Waco, Texas, where she received a Bachelor of Arts degree in 1956. While at Baylor she was the President of the Peer Club, a school service organization. In 1956 she married the love of her life, James Franklin Reeves, her lifelong husband of 66 years.

The couple moved to Houston, Texas, following graduation, where James completed his education at Baylor Medical School. Colleen supported her husband through medical school and residency while raising a family and maintaining a household. In later years Colleen and her family moved to Riverside, California, where James served in the Air Force at March Air Force Base. Following the Air Force she and her family moved to Austin, Texas, where she maintained the family home for 40 years. In Austin Colleen was a member of the Settlement Club, a child service agency. She served as President of the Club and was an ardent supporter of the Club’s annual garage sale. Having grown up in a North Texas ranching family, Colleen enjoyed being involved in her family’s ranching business as well as, together with James, in their family ranch near Wimberley, Texas.

In her later years Colleen and James moved to their ranch and set up their new home. She was involved with PlanIt Texas, an organization created to help improve ranching in Texas to include a focus on environmental sustainability as well as profitability in ranching. Her efforts, along with others lead to the creation of an additional agricultural tax exemption for wildlife management. Colleen learned how to manage her ranch according to the scientific principles of Holistic Range Management and over the course of a few years turned her ranch from a typical hill country rangeland to an environment lush with tall grass, wildflowers, restored streams, butterflies and a variety of flora and fauna. This renewed ranch became a habitat for an endangered bird species. Despite the concerns of traditional ranchers, Colleen notified the Audubon Society of the bird discovery, which led to a burgeoning eco-tourism movement in the Texas Hill Country. Standing her ground, Colleen helped to not only protect the fragile Hill Country environment, she helped create new sources of income for local ranches as well as a market in the region for the many goods and services needed to support wedding businesses. She opened her ranch as a wedding venue and was one of the first ranchers to offer full-service weddings and lodging. Known for her Texas hospitality and her attention to detail, Colleen was well known in the Texas wedding business, achieving many accolades over the course of her 20-year career. Colleen was a genteel hostess and received many friends and others over the years in her home.

Upon her passing, one friend likened Colleen to a ‘vintage fine wine.’ “Imagine, if you will, a piece of fine china, the kind they used to make, both delicate and rugged, fragile, yet unbreakable. With the most elegant sensibilities and refinement. She persevered, forged ahead, stopping at nothing.” Her friend went on to say that Colleen was summoned, beckoned by a profound inner yearning for “All That Is, all that can be known of Truth.”

Colleen is preceded in death by her parents, her beloved brother, Donald McClatchy; her nephew Jeffery McClatchy and her grandson Micah Reeves. Also preceding her in death are her lifelong friends Carole Roberson of Austin and Bobbie Mae Matthews of Wimberley.

Colleen is survived by her college roommate and friend of 70 years, Brooksie Hamaker of Monroe, Louisiana; Longtime friend Ruby Oakmon of Austin, Texas; husband of 66 years, Dr. James F. Reeves; by her son Brian Reeves (Adriana); Brian’s children Arin (Kory); Russell (Alicia); Jeffery (Michaela); and Joshua (Kitty); by her son Russell Reeves (Connie) and their children Anika (Joel) and Pella; by her son Donald Reeves and his sons Benjamin and Liam; by her great grandchildren Arya, Kaia, Fern and Lazlo; and by her nephews Scott McClatchy and Kent McClatchy (Cyndal), as well as her sister- in-law, Neva McClatchy. She will be missed by her many friends in Austin, Wimberley and Blanco. She was a member of Unity Church of Wimberley and was an active member of The Women of Wisdom group. A private Celebration of Life will be held later in the year. “In lieu of flowers, the family requests honoring Colleen with contributions to Keep Olney Beautiful Initiative.”