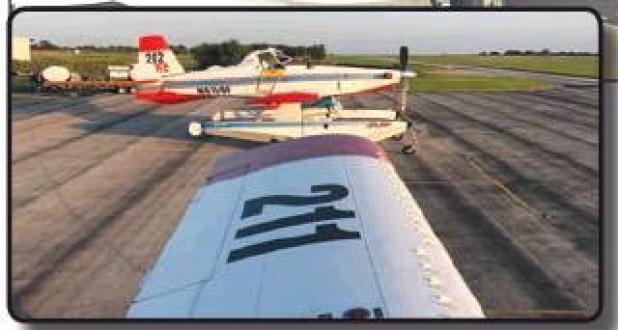 Firebosses Visit Olney, Texas and Olney Volunteer Fire Department gets a chance for a closer look.

It’s homecoming season this time of year in Texas, and a pair of Air Tractor AT-802A “Firebosses” have stopped off in their original hometown of Olney after a busy fire season that took them all over the United States.  Fireboss Tanker 202 and Fireboss Tanker 211 are both owned and operated by Dauntless Air, of Appleton, Minnesota.  The airplanes started their 2019 fire season in April of this year on a state of Minnesota Department of Natural Resources aerial firefighting contract.  In May these airplanes flew all the way to Alaska to fight fires on a Federal fire contract.  In July these two airplanes left Alaska and moved south, through the Pacific Northwest, which had a wetter-than-average (thus slower-than-average) fire season and ended up right down the road in Mineral Wells, TX. Firefighters from the Olney Volunteer Fire Department had a chance to take a closer look at these impressive firefighting machines up close when the planes spent a few days at the Olney Municipal Airport on their way to their winter maintenance bases, where they will be repaired, maintained, and freshened up for the 2020 fire season.

The idea of taking a successful wheeled firefighting airplane, built right here in Olney, and installing amphibious scooping floats on it was the brainchild of Bob Wiplinger of Wipaire, Inc.in Saint Paul, Minnesota.  Bob’s father Ben Wiplinger started the company in the late 1940s, and it has since grown into the premier aircraft float manufacturer and installer.  Bob pitched the idea of the “Fireboss” concept to Leland Snow in the late 1990s, and the prototype Fireboss was built.  It was FAA certified in 2002 and the Fireboss concept has been gaining momentum ever since.  That very first Fireboss, FB202, is one of the two airplanes that visited the Olney Municipal Airport last week.  FB202, the oldest and most experienced Fireboss in the fleet, worked as a pair this year with FB211, a 2018 model, and one of the newest and lowest time Firebosses in the inventory of just over 100 airplanes worldwide.

Even though the Fireboss is based on the same airframe as the wheeled Single Engine Air Tanker (known in the industry as a SEAT), the two airplanes are different tools with very different missions.  A wheeled SEAT Air Tractor AT-802 loads and dispatches from a tanker base, or retardant base, and is usually used to deliver 800 gallons of fire retardant, the bright red mixture of fertilizer, phosphate, and water to build line around a fire to contain and direct it.  Building lines of fire retardant is referred to as the “indirect attack” method of fighting fires.  Once the retardant is delivered, the SEAT heads back to the base to reload.  By contrast, a Fireboss leaves its base (either with an empty hopper or loaded with water, retardant, or gel-enhanced water) with 3 ½ hours of fuel on board, and scoops water from lakes, rivers, or reservoirs to stay “on the job” for as long as possible.

A Fireboss is usually used to drop water directly on the flames, also known as the “direct attack” method of firefighting.  At the request of the fire agency’s Incident Commander, a water enhancing gel concentrate can be injected into the hopper load, making the load even more effective than straight water.  Firebosses are usually most effective in groups of two, three, or four airplanes, although it isn’t unusual to see as many as six Firebosses working in the same circuit on large fires.  The ideal situation for a flight of Firebosses is a wildfire that is threatening property and structures within a few miles of a scoopable water source (think: Possum Kingdom fires of 2011…).  To reload, a Fireboss pilot touches down on a lake or river, stays “on the step” at about 80 mph, and deploys a pair of retractable stainless steel scoops from the keel of each float.  These scoops direct water up a pair of tubes and into the airplane’s hopper at a rate of about 800 gallons in 15 seconds.  Once full, the scoops retract, the airplane accelerates and flies off the water, back to the fire for another drop.   A mile and a half long lake is plenty for a Fireboss.

The guys on the ground with the shovels, trucks, and dozers are the ones who eventually control the fire and put it out, but the aerial assets give them a fighting chance by corralling the fire and taking the energy from the hottest parts of it.   On larger fires when multiple aerial resources are in the fire area (helicopters, SEATS, large air tankers, etc), an Air Attack Platform is usually sent.  This airplane circles overhead and acts as the coordinator of all aircraft and ground units, ensuring that everyone fighting the fire works as a team with a common strategy.

The summer of 2019 will go down in the Fireboss history books, because it marks the VERY FIRST TIME a Fireboss made a drop on a Texas fire!  Lakes Arrowhead, Diversion, Kickapoo, and Kemp, as well as Lake Graham, Possum Kingdom, Hubbard Creek, and Palo Pinto are all scoopable water sources for a Fireboss, making this area a perfect location for this really impressive aerial firefighting tool to work.

Wildfires are a scary reality to us in this part of the world, but the next time the wind picks up, the fuels dry out, and the heat peaks, I hope we’ll see these Olney-built amphibious machines going to work.