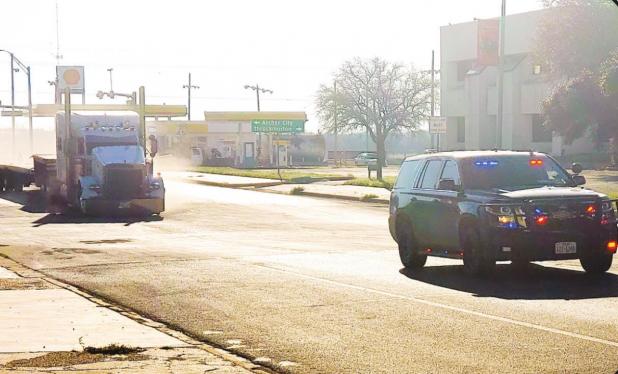 There was a high-speed chase involving the driver of an 18-wheeler truck Friday, March 19. The driver refused to stop and sped down Highway 114 at approximately 90 to 100 mph, said Olney Police Chief Dan Birbeck.

The driver was allegedly driving erratically through several counties, beginning in Jack and ending in Baylor, when officers attempted to arrest the suspect for reckless driving, according to a press release from the Texas Dept. of Public Safety.

“Olney Police Dept. responded to assist the Texas Dept. of Public Safety with a pursuit westbound on Hwy. 114. Our officers went to this side of Jean, where we assisted in using spike strips to disable the vehicle and slow it down,” Birbeck said. “We managed to slow the vehicle down to approximately 30 to 45 mph.”

“I credit the Olney Fire Dept. and Constable Blackstock for assisting us. They were able to block traffic on Main Street, so when we came through town, it was desolate on Main, and we were able to get through safely,” Birbeck said.

We reached out to the Texas DPS for additional details, and we will provide an update as information becomes available on this ongoing investigation.