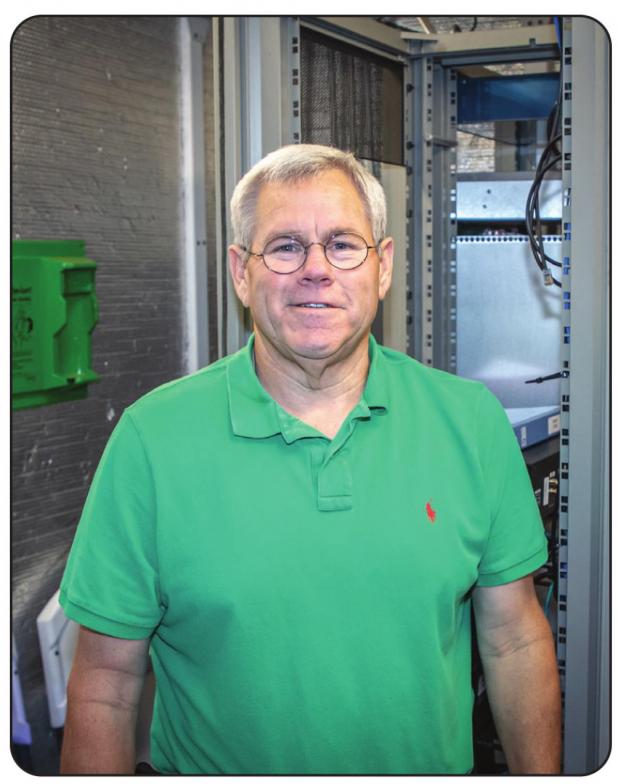 Olney’s first radio station has popped up at 104.3 on the FM radio dial, and it promises an uplifting message and a wholesome playlist for listeners. The new station began broadcasting on May 1 from a radio tower north of Olney.

The station, dubbed “PositiveCountry.com,” is one of two co-owned and operated by Tim Walker of Graham and his silent partner and wife of 32 years, Stacy. Mr. Walker operates both

Mr. Walker operates both the Olney and Graham station, 100.5 FM, out of the offices of his company, Two Way Communications in Graham. He has plans to incorporate local programming centering around Olney school sports and local government, he said. Mr. Walker said he became

Mr. Walker said he became fascinated by radio station towers as a child when his father brought him along as he mowed the grass around the broadcast towers. An interest in electronics came in high school, when his football coach advised him that football may not be suited for him. “I took the advice and began taking morning electronics classes that coincided with the time football practices took place, as a way to save face, knowing I could say I could not do both,” he joked.

After graduating from high school, Mr. Walker got a job at a cable television company based in San Antonio in 1978. He spent the next few years learning the broadcasting business, and in 1983 earned his chief engineer’s license. He went to work as a chief engineer at a San Antonio radio station in 1986. Mr. Walker also is a certified broadcast engineer, whose job is to keep the station onair, both legally and mechanically.

The Olney-Graham area appeared on his radar while piloting friends who wanted aerial photographs of their Graham ranch, he said. Mr. Walker landed his plane at Graham Airport to have lunch and found the town so pleasant that when he learned that a Newcastle radio frequency was up for sale at a Federal Communications Commission auction, he bid on it and won. Mr. Walker upgraded the frequency to broadcast to Graham, Olney, Possum Kingdom and Breckenridge. He and his wife packed up and moved to Graham and have been running the station for the last six years.

Mr. Walker named the radio station in Graham Y100.5 because he already had promotional jingles using that name, and because the ‘Y’ stood for “Young County,” he said. Mr. Walker, who is a member of the Graham Chamber of Commerce, said part of his radio station’s purpose is to promote community.

Mr. Walker partnered with Sid Palmour to bid on the Olney station as far back as August of 2021, and later won the bid for the frequency. Mr. Walker chose a site for the radio station tower just north of Olney up on a hill that was occupied with a wind turbine farm, in a spot that he thought was perfect for a tower.

The Olney station is five times as powerful as Mr. Walker’s Graham station, and can reach into parts of Oklahoma, he said.

Mr. Walker gave 104.3 the slogan “Positive Country Radio” envisioning a family loading up in a car and turning on the radio to find wholesome, family country music. Mr. Walker said reads the lyrics to every song before including it in the station’s music rotation, to ensure they meet those stan-dards.

Additional local programming could include airing the Coaches Corner interview show and game sportscasts produced on Facebook by Olney Mayor Rue Rogers and school board President Jake Bailey. He also envisions working with the Olney Chamber and City of Olney on community-based programming.

Mr. Walker said the stations bring in musical talent to perform throughout the year, and the next group, The Isaacs, are set to perform on Oct. 15.

Mr. Walker would like community input on programming, and encourages the public to request music or leave comments at 940-549-1005 or email info@positiveradio.net. The station also streams online at www.positiveradio.net.