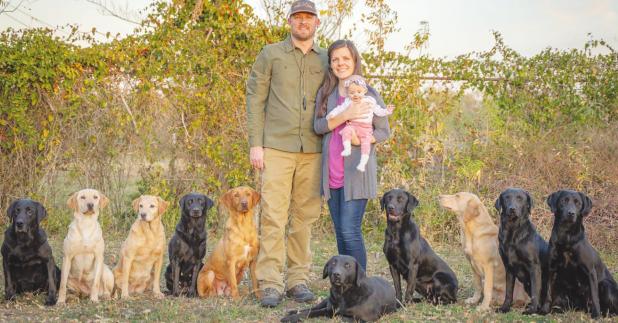 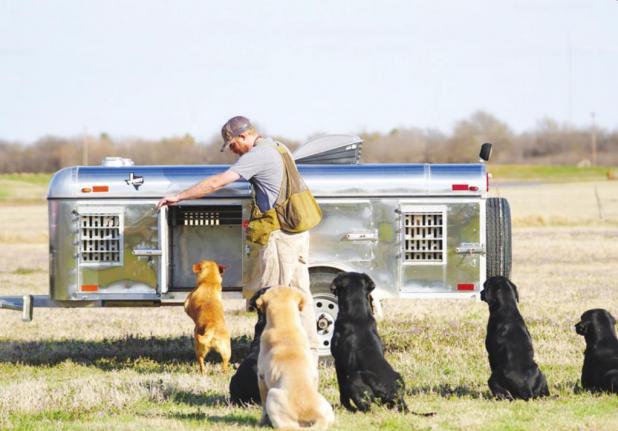 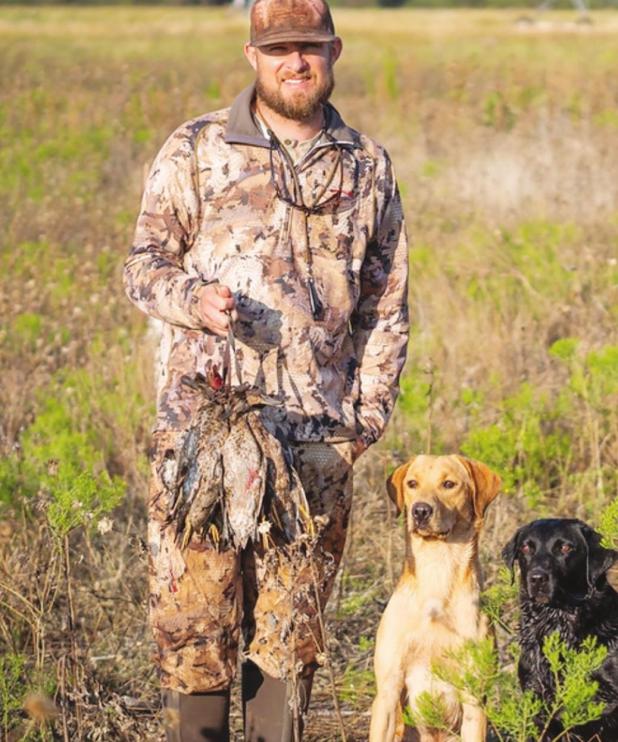 With a love for his community and Labrador Retrievers, Sammy Livingston returned to his hometown of Olney in 2017.

Along with his wife, Andrea, the two own Livingston Gundogs, which they started in 2015. This year, a second location - Livingston Gundogs Atlantic, in Georgia - was opened and is run by their brother-in-law. The Livingstons are dedicated to enhancing the quality of life for Olney residents by being active in the community and supporting local businesses.

Sammy, the son of Trudy Capps and Gary Livingston, said his family has always supported his endeavors.

“I’ve always wanted to be involved in the hunting industry since I was a kid,” remembered Livingston, who met Andrea in Vero Beach, Florida, before returning to the area a few years ago.

“I loved playing with Legos, and I enjoyed drawing and painting. As I look back on the floorplans I sketched and my paintings that have ducks and Labrador Retrievers and all the things I am doing in life, I realize now I was drawing my future. I just did not know it at the time.”

His grandfather, Shorty Livingston, also played a big role in his life.

“I remember visiting with my granddad while I was attending school and working for a marketing solutions firm. I wasn’t enjoying it,” Livingston said. “(Shorty) said happiness is the key to life. While sitting in his living room that day, I decided that I was going to make a career change, so I reached out to Roy Wilson at Texas Best Outfitters in Stanford.”

At the time, there was not a full-time position open, but the Olney native showed up every weekend, doing anything from unloading luggage, to cooking breakfast, to guiding the morning and afternoon hunts. Long days, often filled with “bottom of the barrel” tasks, soon led to a full-time job.

A few years later, Livingston, then 24, caught his first big break when the job of a lifetime opened in Florida.

His mom and stepdad, Ron Capps, told Livingston to take a chance, and flew him down for the interview. That turned into a nearly decade-long job where Livingston worked for a prominent family, managing a quail plantation, guiding hunts and training hunting dogs.

Perhaps most importantly, Livingston also met Andrea during his time in the Sunshine State.

He attended the church where she grew up, but the two didn’t even talk for the first six years. Finally, she agreed to go on a date with him. Six months later, they were engaged. Six years later, they are now married with a 4-month old daughter, Sawyer, who is the light of their lives.

For Livingston, now 37, the journey has been well worth all the long days, and hard nights. After all these years, his advice is simple: if you’re following your dreams, don’t be afraid to start at the bottom and work your way up.

“When I pursued the job of my dreams, I did everything from cleaning to cooking,” he added. “You should learn everything about the job, not just what you are most qualified for. Even though I am the owner of Livingston Gundogs, I tell everyone that I am just a professional poop-scooper.”

Livingston Gundogs’ mission is to “import, train and produce the highest quality Labrador Retrievers while building lasting relationships with its clients and dogs.”

You can learn more about their dog-breeding, training and hunting services by visiting LivingstonGundogs.com.