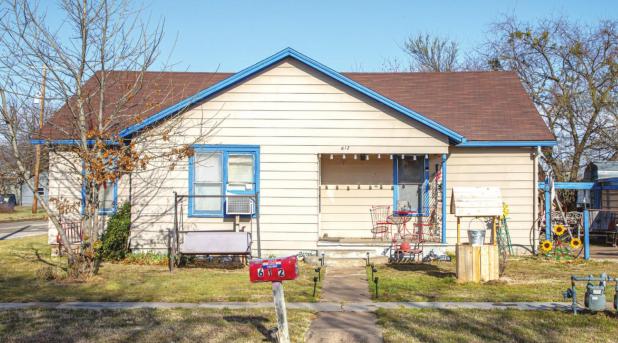 The house at 612 N. Avenue F sits on the west 75 ft. of Lots 5 and 6 of this addition, which is platted in the 1920s. In 1925, some oil developers named Globe Drillers purchased lots 6-11 in this addition, evidently for speculation. The name of the owners, Jennie Belle Vershoyle and her husband C.H., and J.W. Tate, were the principals of Globe Drilling.

In 1941, Ed O. Dietrich bought the lot. Dietrich ran Sunnyview Grocery adjacent to Parker’s Grocery (The Parkers that are in Parker Square in Wichita Falls today). The buildings for all these grocery stores could have been fairly old but not built before 1910, but all would have been built in the oil boom of 1923.

In 1945, Dietrich sold Lot 6 to Boyd Bryan Jackson and spouse Ouida Mae (McCluer) Jackson, who he married in 1940. Boyd Jackson went to war in 1941 and returned in 1945, so it is unclear if he built the house before the war or when he returned. (Some of Jackson’s siblings you might recognize are: Arlene Blancett and the twin sisters, Bobbie and Berta Jackson.) Jackson needed more space than the one lot, so he got a Sheriff ’s sale to sell Globe Drilling’s interest in 1976. In that same year, he conveyed the east 60 ft. of the property to his son, Billie Lionel Jackson and his wife, Linda. After Quida died in 1995, Billie owned all of the property. In 2003, Billie sold the property to the present owners, Billy and Martha McDonald.