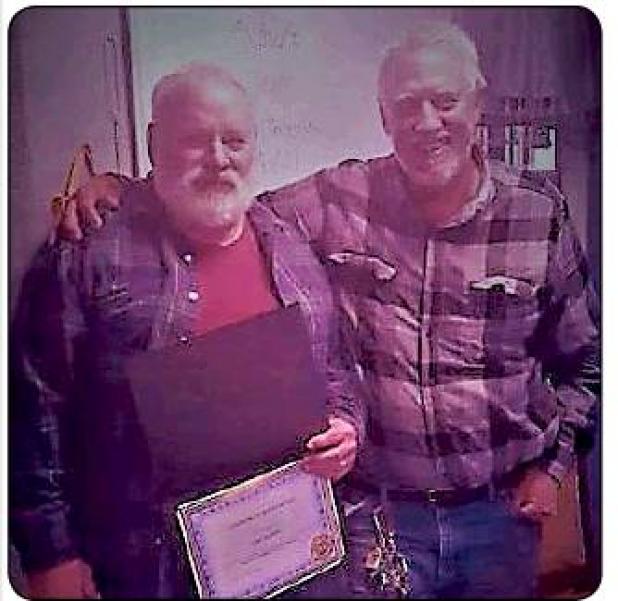 It’s been a long year for Gary Salzman. On Jan. 17, 2017, Salzman left Red River Hospital in Wichita Falls and arrived at House of Mercy Enterprises (H.O.M.E.) In 2019, Salzman became the second person to complete the yearlong Christian development program at H.O.M.E.

Salzman grew up in a loving home in the state of New York with parents who were believers in Christ and who did their best to raise him with love in a Christian environment. Salzman regularly attended church with his family. He reminisced about his upbringing in a good home. However, after the family moved to Georgia while Salzman was in the seventh grade, he began drinking alcohol.

Years later, Salzman attended Bible college and earned a Bachelor of Science degree in Christian counseling. His goals entailed working with youth and serving in ministry. He realized these goals when he worked with “Youth for Christ” and later worked in the criminal justice system as a conditional-release probation officer.

In 1976, an earthen dam broke near his home while attending Bible college in Georgia. Salzman saw the tragedy firsthand and took part in the rescue efforts by helping with the cleanup. He developed deep anger and resentment. His friends lost their lives. “People died, a lot of people got hurt, and I got angry with God,” Salzman explained. “How could my friends be hurt, how could [God] be a loving God if I had to go through this stuff, and how could good people die if He was a good God”?

While questioning God and his faith, Salzman’s anger grew intensely and he noticed his dependency on alcohol. As a result, he experienced heartache when his wife of 17 years took their teenage daughters and left him. Alone and angry, he suffered devastating bouts of depression and attempted suicide, twice. It was his second failed attempt to end his life that caused him to be hospitalized by order of a judge, which brought him H.O.M.E.

Married for the second time, his wife Barbara and his adult daughters did not want anything to do with him. His wife wouldn’t even talk to him. “I began healing from the inside and so when I began healing, that’s when all my relationships started to come back together,” he said.

Salzman remembers arriving at the House of Mercy more than a year ago. “First of all, I suddenly became surrounded by peace,” he said.

A few months later, his wife began speaking with him, conversations quickly became a daily occurrence, and soon Barbara visited him at H.O.M.E. The couple now regularly spend time together both here and at their home in Cleburne. Salzman’s relationship with his daughters has also improved, and he is building relationships with his grandchildren. “House of Mercy saved my life. The Lord has blessed this place with a director and a staff that focuses on changing the way people think. You need somebody to help you get that first little step up, and that’s what this place is for. People can come here and not have to worry about their past. Focus on making themselves better in Christ, growing and changing their life and becoming a better person,” Salzman said.

Salzman plans to stay on at House of Mercy. He currently teaches a class which focuses on the different characteristics of a Christian man and woman, and how to live that out in everyday life. Additionally, he has an active role in fundraising and promoting community awareness. He is excited about getting the word out about H.O.M.E. and the great things happening there. “The Lord called me here, the Lord changed me here, and I’m not going anywhere until the Lord tells me to leave. I am going to stay right here and help the House of Mercy any way I can.”

Salzman wants the Olney community to understand the importance of this ministry and how it is changing people’s lives. For those who are hurting, Salzman said, “You are not alone! I thought the whole time I was alone and that I was the only one in that kind of situation.”

To learn more about the House of Mercy Enterprises, visit: http://houseofmercyenterprises.org/