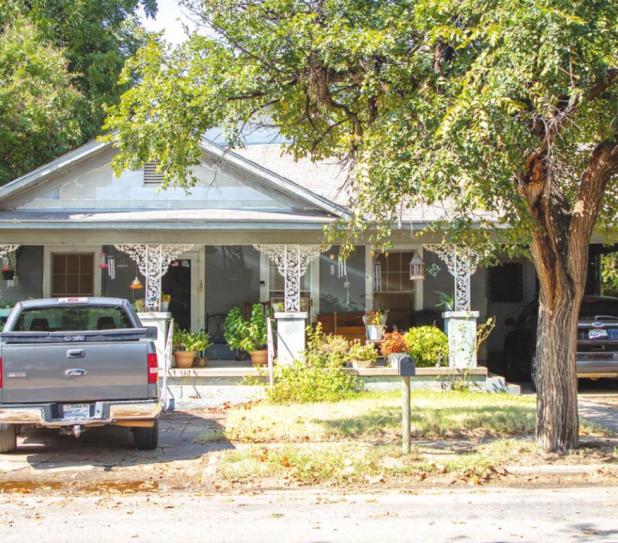 Mr. Ragle was a prominent farmer, and oil was discovered on his farm and the pool was named for him. He was a Mason and member of the Cumberland Presbyterian Church.

In 1946, the Ragle heirs sold the property to Loy Mitchell (1913-1979) and his wife Margriette (1920- 2011). Barnett and both Mitchells had use for the property—Loy as a Gulf filling station on Main and his wife for a beauty shop. The house was turned sideways, and they made it their residence with a little structure between the house and station. Loy was the Gulf consignee for Gulf and was a farmer and oil operator. The Mitchells had two sons—Ron and Don. Loy was a Mason, a member of the Olney VFD, a Lion, and a member of the Civil Air Patrol.

In 1971, Lee Roy (1914-1998) and Ethel (1916-2002) (Ballew) Hambrick became the owners. Lee Roy was from Navarro County and came to Olney in 1938 after marrying Ethel in 1934. He was owner and operator of the Fina wholesale and station and was employed by Morgan-Mistletoe Express. He and Ethel were the parents of Charles and Nelda.

In 1973, the Hambricks sold to Christopher D. Cox and his wife, Karen.

In 1997, the Coxes sold to Robert L. and Janie S. Wilson, who came here from Jacksboro. They have four children, but only the youngest, Karen Davis, lived in the house and went to school here. She works at Hamilton Hospital presently.