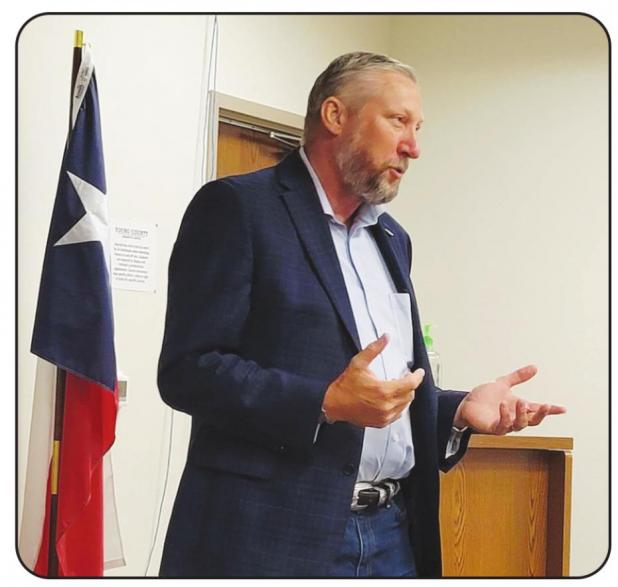 Sen. Springer opened with a brief discussion of what he has been working on in Austin. The first change he mentioned was the hot topic of voting restrictions and regulations.

“We extended early voting hours. In the past, we all know that if you’re in line at the polls on Election Day, you get to vote no matter how long it takes you. We’ve now added that to early voting. So, we’ve made it easier to vote,” Springer said.

Springer said regarding voting, “We’ve made it easier to vote and harder to cheat.” He mentioned ballot harvesters that attempt to swing local elections. “I want everybody who wants to vote to be able to vote, but I want to know that it’s that person who votes. So, like we do voter ID in person, you’re going to have to write the last four digits of your Social Security number to prevent fraud.”

Another hot topic issue for Texas voters is Roe v. Wade and its effect on anti-abortion advocacy. Springer said he is proud of the work they have done with passing two bills.

“I was a joint author on a bill we call the trigger bill. There is a court case in front of the Supreme Court this fall that may overturn Roe v. Wade. If it does overturn Roe v. Wade, then abortions in Texas will be illegal unless a future legislature comes back in and makes it to where you know that abortion is going to be performed. But then the bill that’s getting all the national news right now is our heartbeat bill. And that means when a heartbeat is detected, you can’t have an abortion. And the Supreme Court ruled that the way we had structured it is legal,” Springer said. The audience applauded after Springer touted that in the first week of passing the bill, 1300 fewer abortions were performed.

Springer continued the discussion and said the legislature passed seven more bills to enhance and protect the constitutional carry, allowing Texans to carry a handgun without a license or training. Springer referenced the concerns of some Democrats, including the fear that there would be “blood on the streets and crazy things happening.” Springer said none of those things happened with the passage of the bill.

“It’s law-abiding Texans who always follow the law that allows them to carry a gun to their car. They may leave Graham and drive to Dallas to pick something up. And all of a sudden, they realize, ‘this isn’t quite the neighborhood I thought I might have been driving in, or I just don’t feel comfortable.’ Whatever the case is, they now can take their gun and do business as every law-abiding Texan should have been able to do,” Springer said.

After mentioning a few additional wins in the state Senate, Springer allowed attendees to voice their concerns. He addressed all questions and concerns that were tabled and mentioned his campaign for re-election. Visit SpringerForTexas.com to learn more about Sen. Springer.