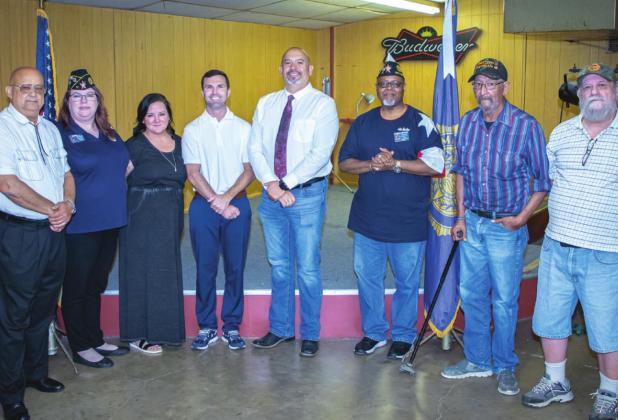 “The American Legion is a lot of different things, but the main thing it is, veterans that are supporting other veterans and supporting the community,” Mr. Garcia said. “A lot of people don’t really know what we have to offer; the American Legion has a strong presence in Congress and works a lot with the [Veterans Administration].”

The American Legion pushed programs like the Montgomery GI Bill, and more recently, a bill to help veterans who were exposed to burn pits during the Iraq war and subsequently sickened, he said.

“That was a big push from the American Legion to help these veterans start getting the compensation that they deserve,” Mr. Garcia said.

The American Legion also backs programs to help wounded warriors obtain adaptive equipment, and works with serving military personnel and posts and bases to help “with things that they may need in that same nature.”

The group also supports youth programs, including baseball and a marksmanship program. Students can win scholarships in the American Legion oratory contest as well as through other sponsored programs, he said.

“These programs are all supported from donations,” he said. “We don’t receive any funding from the federal government. Everything that we do is supported by the communities and from donations.”

Mr. Garcia explained that their cantinas are only a small part of the importance of American Legion Posts, which serve as places for veterans to gather and talk about things and to offers well as offer support to each other. Garcia says ALP 414 is here to support the community as well and plans to have the post more involved in community events in the future. As the new Post Commander Garcia wants to see the post thrive once again and become integrated with the community. Garcia wants the community to know that the community is welcome to come to the post and socialize and get involved with post activities. ALP 414 will have a booth at the September 10, Olney in America Car Show, hosted by the Olney Chamber, for anyone wanting to stop by and learn more about the American Legion. For more information or to reach out to the ALP 414 please call Post Commander Garcia at 940-550-2831 or email at cgarcia.post414@gmail.com .