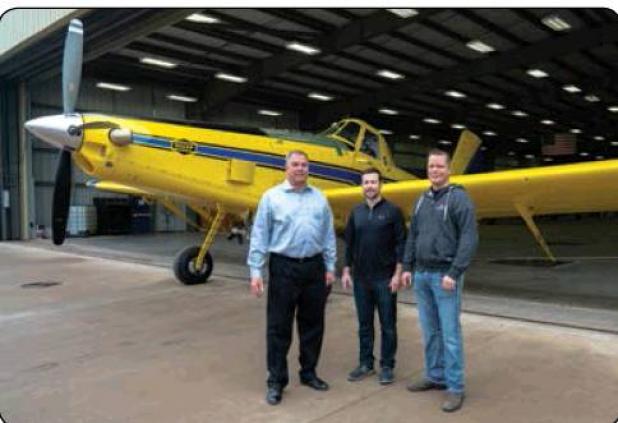 Air Tractor recently marked the delivery of its 50th 502XP. It was one of three 502XP airplanes delivered in early February to three Canadian aerial spraying operators. They traveled to Air Tractor’s factory to ferry the 500-gallon capacity airplanes to new homes in the western Canadian provinces.

“This is certainly an important milestone for us,” said Air Tractor President Jim Hirsch. “Demand for the 502XP has steadily increased since we introduced it in 2016. That tells me we’ve built an airplane that addresses a real need in the market and is working well for 502XP owners.”

Dave Lekivetz—ag pilot and owner of Lekivetz Farms—took a commercial flight from subzero winter weather in Saskatchewan to pick up 502XP No. 50 on a breezy, spring-like day in Olney. The new Air Tractor 502XP replaces an R-1340-powered AT301 Lekivetz has flown for 17 years.

“I’ve enjoyed flying my AT-301, and want to stay with the Air Tractor brand,” Lekivetz said. Noting that other farms and houses surround his own farm, he added “The XP seemed like the logical choice for us due to its quiet operation, 500-gallon hopper and high performance. It’s the plane I plan on retiring with.”

Air Tractor’s new Canadian dealer, Dave Frisch of Portage Aircraft Specialties, facilitated the sale of the 50th 502XP. Lekivetz was pleased with Frisch’s attention to detail. “Dave has been great to deal with. He kept me informed throughout the entire purchase process.”

Frisch was also at Air Tractor with ag pilot Walter Dyck to ferry the other two 502XP airplanes to their respective owners in Canada. Travis Karle of Accumark Aviation, Nipawin, Saskatchewan, will take possession of 502XP No. 51. The 52nd XP goes to aerial applicator Jonair Ltd. in Prairie La Portage, Manitoba.

Travis Karle’s aerial spraying operations span the length of Saskatchewan with seven permanent remote bases. His fleet includes an AT-402B, AT502B and AT-504 that spray crops of wheat, oats, barley, canola, lentils and chickpeas. Karle’s new 502XP will replace the 402B. According to Karle, the Pratt & Whitney PT6A-140AG engine combined with the AT-502A airframe will make the plane a great performer. “I think the 502XP will be a rock star. All the pilots I’ve talked to who fly them say it’s an amazing machine.”

The 502XP boasts 867 horsepower to haul a full load even on the hottest days. It’s a productive balance of an advanced airframe and engine providing speed, capacity and productivity in extreme conditions. With the 502XP, operators can finish more acres in less time.

During their time at Air Tractor, Lekivetz, Frisch and Dyck toured the manufacturing plant and made final preparations for their return flight to the frosty Canadian latitudes the following day.

“In our offseason, we don’t do much flying,” Dyck explained. “So we’re always excited when we can get back in the air. The thought of taking off in a brand-new Air Tractor brings a whole other level of anticipation.”

“It is exciting,” Hirsch said. “Every time we roll a new airplane out the factory doors for a customer is a great day.” said Hirsch.