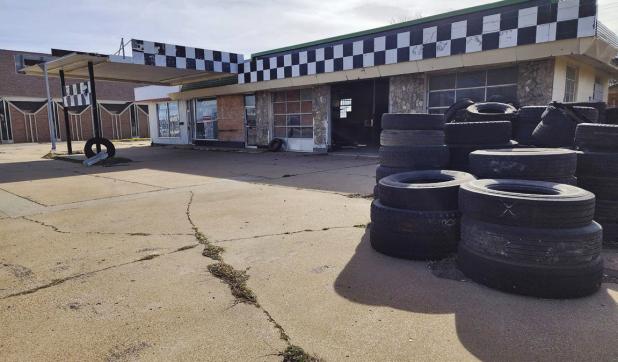 A Texas-based holding company has purchased the abandoned gas station on Main Street at a county foreclosure sale, a development that could simplify or complicate the City of Olney’s efforts to remove a huge pile of tires from the property, City Administrator Arpegea Pagsuberon told the City Council on Jan. 9.

“For the Council’s information, 301 East Main [Street] – the tire shop – it sold. A company out of [Houston] has purchased it for $17,000,” Mrs. Pagsuberon said. “They are aware that there is an additional $23,000 in back taxes that they need to pay… the [city’s] attorney had explained to the buyer that aside from the back taxes, there are tanks in the ground and the tires need to be remediated.”

The buyer was listed as GFF Texas Holdings LLC, whose registered agent is a Houston law firm called Cook Legal Group, according to the city’s attorneys who handled the transaction. The company did not return calls for comment. A representative for Cook Legal Group declined to identify who owns or operates the company, which is based in Houston and received its state operating permit in August, according to state records.

City Councilmembers reacted with incredulity; their efforts to clean up the eyesore property beside the First Baptist Church of Olney had become mired in bureaucratic red tape at both the state and federal levels since last spring, and multiple attempts to sell it at county foreclosure auctions had produced no takers.

“We were all incredibly shocked that it sold,” Mrs. Pagsuberon said.

The Council voted last month to take ownership of the property so as not to lose a $41,000 state grant the city won last year to remove about 10 trailers-worth of passenger and commercial vehicle tires. The City also invited residents to bring their own tires for free disposal.

The ambitious clean-up plan hit a snag when the Texas Commission on Environmental Quality refused to fund the grant after learning the tires sit on private property. Complicating the situation, the U.S. Environmental Protection Agency regulations require that underground gasoline tanks on the site be removed before the property could be sold, possibly saddling the city with the gas station “indefinitely,” Mrs. Pagsuberon told the Council at the December meeting.

After confirming that the new buyer understood the liabilities associated with its purchase of the gas station, Mrs. Pagsuberon convinced the Nortex Regional Planning Commission to allow Olney to use the grant to purchase a tire cutter. The agency finally released $19,300 in grant funds for the purchase of a $27,000 tire cutter, she told the Council on Jan. 13.

The city will use American Rescue Plan Act funds to pay the balance, she said. The tire cutter will be located at the Olney Convenience Station and will allow city code enforcement officers to “deal with our own tire issues in town at a slower pace and with the tire cutter instead of having to pay to have the tires disposed of in the way we did for [the gas station],” she said.