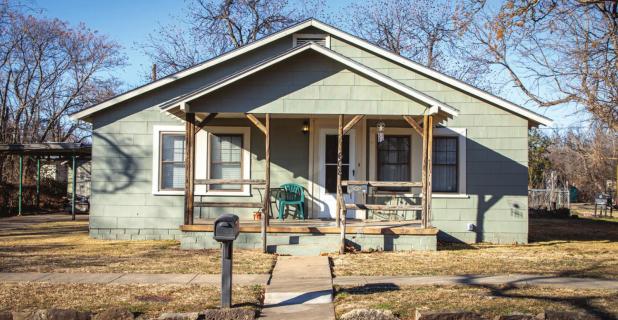 In 1925, The Texas Pipeline Company bought the lot and built the house for a place for their employees to live, as this was during the Swastika Oil Boom and housing was scarce in Olney. Bascom (Mack) (1904-1971) Nelson went to work for the Texas Pipeline Company in his early adulthood, probably in Wichita Falls, as this was the only employer he ever had. In 1927, he married Dorothy Lucille Robinson (1905-1996) in Archer City and her obituary shows that she became an Olney resident in 1934. The Nelsons apparently moved into the house that year and in 1936 the Texas Pipeline Company sold the property to Mr. Nelson. Mrs. Nelson had attended the University of Texas prior to their marriage. Their first child was Hugh and he was born in 1928, and the location of the house was convenient for parents with children in school. They had two daughters later and all the children went to U.T. Hugh was the valedictorian of my 1945 OHS class and was my best friend in the class and I finished as salutatorian. When we had our fiftieth year after graduation re-union, Hugh and his wife stayed at my house. Hugh followed in his father’s lead and spent his adult life working for Texaco. His sister Carolyn married a son of the Weekley Family from McAllen who ran the furniture store there. His sister Margaret married a Nakamura from Hawaii, who was of Japanese descent and was living in Austin when her mother died. In 1971, upon Bascom’s death, the children gave their interest in the house to their mother. Mrs. Nelson was active here in First Baptist Church, teaching Sunday School for fifty years, also in the Sororsis Club, and organized the first Camp Fire Troop in Olney.

In 1991, Mrs. Nelson conveyed the house to James Marcus Hale and wife Gayle, and they defaulted on their note to Farmer’s National Bank of Newcastle. There was never another homestead exemption issued for the house, which indicates that it has been a rental property all these years.