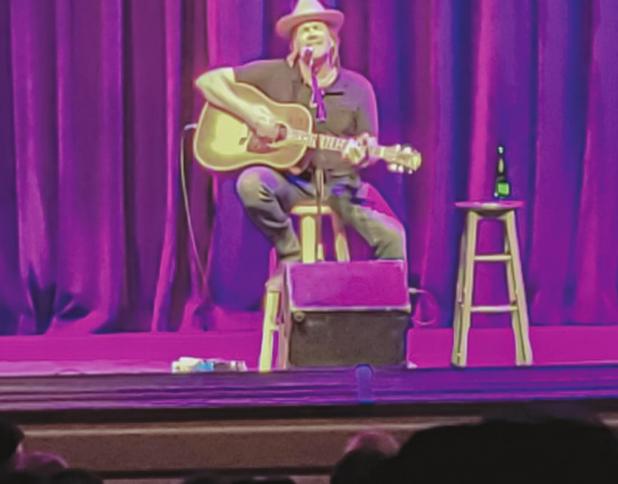 The Graham Concert Association (GCA) hosted their second concert of the season Oct. 26 at Graham Memorial Auditorium. GCA had initially booked Nashville-based singer/ songwriter Sean McConnell, but due to a last-minute schedule change by McConnell’s management team, the board opted to book Texas troubadour Jack Ingram as a replacement performer. GCA board member Brendan Weatherman entertained the audience for 30 minutes while waiting for Ingram to arrive at the auditorium.

Fortunately, Weatherman’s 15-year musical performance history made him the perfect opening act as the audience seemed pleased with his song selections, which included covers and originals. Weatherman has been performing with his band “The Last Plainsmen” for the five years he has resided in Graham. He also serves on the worship team at the First United Methodist Church in Graham.

Weatherman explained regarding Ingram’s performance, “During midperformance, Jack’s manager and I decided it would be best to cancel and reschedule because he was not in the best of health.” The GCA plans to offer a make-up performance for individual and season ticket holders in the coming months to make up for the canceled October performance.

Many fans may know Ingram from his chart-topping hits “Barefoot and Crazy,” “That’s a Man,” and “Lips of an Angel,” among other songs that charted. In addition, he recently collaborated with Miranda Lamber and Jon Randall on his album titled “Marfa Tapes.”

GCA brings top-quality entertainers and performers to the community every year. The upcoming performances for the 2021-2022 season include The Quebe Sisters (Nov. 2), Suzy Bogguss (Dec. 7), Wade Bowen (Jan. 18), and Fort Worth SymphonyOrchestra (Feb. 15). All concerts are held at the Memorial Auditorium located at 628 Third Street in Graham. The doors open at 6:30 p.m., and the shows begin at 7 p.m. For more information about the upcoming season and to purchase tickets online, visit www.GrahamConcertAssociation.com.