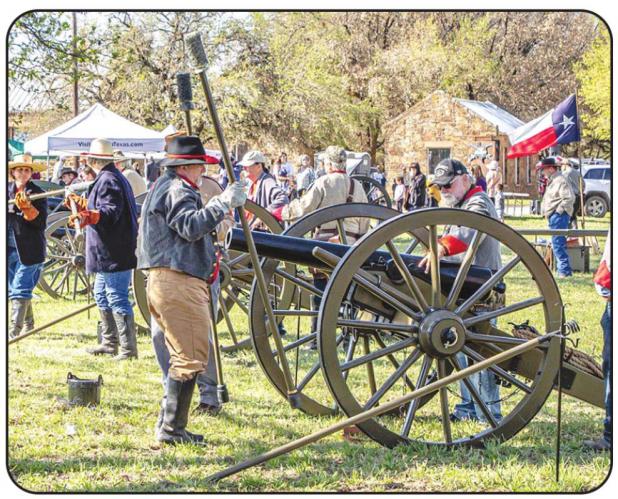 Young County Commissioners agreed to pay $5,000 for a Fort Worth architecture firm to survey where to put a cannon cover and a building that will serve as a shop and storage building and a blacksmith display for Fort Belknap.

Fort Belknap historian Jim Hammond told the commissioners at their July 11 meeting that the fort’s two cannons need cover from the weather, and he needs a place to store the fort’s two large trailers and lawnmower and to work on repairs to the 171-year-old historical site’s structures and displays. He also would like to use the antique tools that are among the museum’s exhibits for a new display about blacksmithing.

Hammond said he wanted to bring in Komatsu Architecture of Fort Worth to help decide where the new structures should be placed, and how they should be constructed to comply with rules covering historical sites.

“Komatsu is coming in to do a historical survey to make sure we’re not doing anything that would degrade the historical site because we have those historical designations out there,” he said. “We have the national historical landmark and the national recorded historic place. The national landmark designation is the rare one; it’s the same designation as the Alamo has and there’s only 50 of those in the state. Young County is lucky to have two of those. So by going out there and building willy nilly, doing whatever we want to do, we stand to lose those designations.”

Komatsu has “the expertise and the background and they work with the Texas Historical Commission, …and they make sure that we’re staying within the bounds” of the historical designation rules, he said.

The commissioners will use hotel and occupancy tax revenue to fund the project, which Hammond estimates will comprise a cannon cover of 10 or 15 feet by 20 feet, and a building of about 1,200 square feet.

He would like the new structures to “stay within the historical purview” of the former U.S. Army post, which was founded on June 24, 1851, initially at the current site of the city of Newcastle, then moved two miles south to take advantage of Brazos River springs.

The first buildings on the site were jacals, or adobe-style huts, that were replaced with brick buildings.

Mr. Hammond said Komatsu will help decide where to site the buildings, and what kind of veneer to put on them to blend with the historical buildings.

It is not yet clear what the cost of the structures will be because of the fluctuating prices of building materials, he said. “We are not even at that stage yet,” he said “We’re looking at putting together this survey … theyn we’ll come back and we have a game plan and we can build out that game plan.”