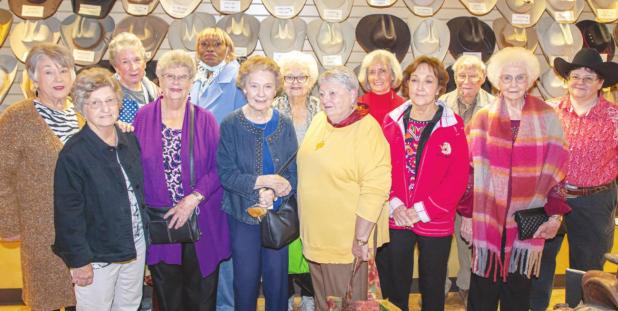 Amity Club’s Visit to the Museum of North Texas History

The Amity Club held its third meeting of the 2021-2022 season at the Museum of North Texas History in Wichita Falls Thursday, Nov. 4. After the meeting, the members had lunch at Casa Mañana, located across the street from the museum. Club president Gail Spears was the hostess and program leader for the meeting themed “The Tie that Binds our Heroes.” Judi Winslow as the co-hostess.

“We decided to have a field trip for our November meeting in honor of our military men and women. The museum director Madeleine Calcote mentioned that the museum has a military exhibit worth exploring. So, I thought it would be an excellent opportunity for the Amity ladies to have a field trip in memory of the men and women who fought for our freedom,” Spears said. “We had a wonderful time learning about history on a guided tour with the museum curator Leanne Ray. Everyone seemed happy to venture out after being isolated for so long.”

Spears and a few other members mentioned that some of their favorite exhibits other than the military exhibit included the hospital exhibit, which featured the iron lung that was used for the treatment of polio, the collection of cowboy hats owned by local ranchers and the newly opened “Heart of Downtown Model Train Exhibit” that opened Oct. 23 and will continue until the end of February 2022.

“Ron Mauch spent so much time planning, designing, and installing this amazingly intricate model train and display. We hope visitors enjoy it as much as we are,” Calcote stated in a release to the press.

The train shows are 45 minutes long and run at 11 a.m., 1 p.m. and 2:30 p.m. Thursday through Saturday. The Museum of North Texas History is open from 10 a.m. until 4 p.m. For more information about the museum, please visit the website https:// MuseumOfNorthTexasHistory.org.

The Amity Club was organized in 1937 with the primary objective of ensuring a “united effort toward intellectual advancement and service.” The next meeting will be the club’s Christmas luncheon on Dec. 2 at Olney Heritage Museum. The members are asked to bring two pairs of socks that will be donated to nursing home residents.